Judd Apatow and the Everyday Appeal of Staten Island 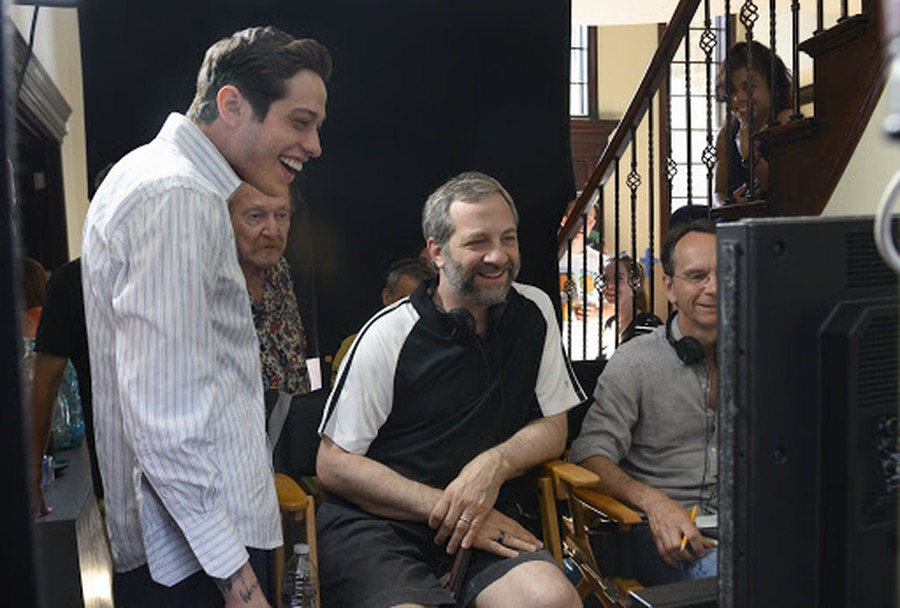 “There’s this certain vibe to Staten Island that’s not like the other boroughs, not like anywhere else in the country.”

The Maroon sat down with director Judd Apatow to discuss his new film, The King of Staten Island. Also conducting the interview were reporters from The Daily Illini, The Daily Texan, The Daily Californian, and Washington Square News. This interview was lightly edited for clarity.

The Daily Illini: Why was the accurate and intricate portrayal of Staten Island important to voice for the film?

Judd Apatow: Generally, I always want to be accurate. There’s nothing worse than screwing that up and everyone in that city and neighborhood [getting] mad at you. So, from the very beginning, we said, “Let’s capture this place we haven’t seen on screen very often.” I think the only movie where they talk about it is in The Purge. When we did all the location scouting, Pete [Davidson] went with us and showed us all the spots we should shoot. That was really helpful for our production designer, Kevin Thompson, and our [director of photography], Bob Elswit. There’s this certain vibe to Staten Island that’s not like the other boroughs, not like anywhere else in the country. It’s a bit of a strange place because there’s nothing there that would make people want to visit it if you didn’t have friends or family there. There’s no attraction, there’s no amusement park, there’s no concert hall, there’s no museum that lures anybody there. So, it’s almost like a land without visitors, and the people who live there don’t leave there and go to Manhattan in a surprising way. It is its own bubble and its own culture, and we felt that if we shot the entire movie there, we’d get a truthful look at what it feels like to be there.

The Daily Texan: What characteristics of a hero were most important for you to capture in a movie?

JA: I think the fact that these people are just everyday people who’ve made the choice to make the ultimate sacrifice for strangers. We don’t really see a lot of that in our immediate circles. I had never been around firefighters as much, and I didn’t really know what they were like. I was so moved because they are all really kind and they love [their jobs]. They have such joy for the job, they don’t get bitter; they don’t have dreams of retiring. They really enjoy it. I said to one of the firefighters, “Is most of it boring? Is most of it, like, a pain? You get sent to someone’s house to get their cat or somebody fell or something like that?” The man said to me, “I know this sounds corny, but we just really like helping people.” And he was so sincere it really touched me, and I think it is that very everyday quality that was so powerful. This was just the way they chose to live their life, and we all need to acknowledge that more than we do—that there are these people out there who are so willing to try and save us and protect us.

The Daily Californian: What is your process of getting the actors to explore these emotions and really channel that into their performances?

JA: For me, it is about preparation. We did a table read of the script almost five months before we shot, and did a lot of auditions. Pete read with everybody at the auditions, which was a way for us to discover the material. Then, when we hired people, we did rehearsals at L.A., and when it was time to shoot, we did another round of rehearsals in New York. That allowed us to explore the characters, the story, and the scenes pretty deeply before we hit the set. When we hit the sets, you know, we know what we’re doing, but then we toss the script and in addition to doing a scripted version, we do very loosely improvised versions of a lot of the scenes. We always find moments in those takes that are better than most of what we scripted. If you create that looseness, you know, out of the blue, Bill Burr is gonna come up with a line that you would have never thought of in a million years. A lot of people’s favorite moments in the movie were created during these loose moments. I might just do that because I’m insecure as a writer, but I’ve found that when you have talented people around you that have writers’ minds, they add levels of layers that I could never think of alone or just with Pete and David Sirus.

The Maroon: I’ve noticed throughout your directing career that all your protagonists tend to be “lost souls” trying to grow up, like Steve Carell from The 40-Year-Old Virgin or Seth Rogen from Knocked Up. Do you see the character of Scott as a “lost soul,” and would you say that was what attracted you to the character and story in the first place?

JA: I would say that I’m attracted to people who need to go through some sort of experience to get out of a rut. I was interviewing Mindy Kaling for a charity a couple of weeks ago, and she said, “I noticed that in most of your movies all your main characters are ‘stuck’ somehow.” And I never really thought about in those terms exactly, but I realized that’s exactly right. It’s usually somebody that needs something to happen to knock them out of their rut and force them to grow and evolve in some way. Personally, I think everyone’s a “lost soul.” The world is trying to get through the day, make their life work, make their relationships work, whether it be good parents or be good kids or good friends, and that’s very difficult a lot of the time. I have a lot of compassion for the basic human struggle, but I also find it very funny. I just think us humans hanging around, hurting each other, helping each other, screwing up is generally comedic most of the time.

Washington Square News: What made you decide that Pete Davidson’s story was a story you wanted to tell?

JA: Well, I certainly was interested in Pete and working with him to come up with a story that would let people understand what he’s been through. I felt like if we were able to do that well, a lot of people would relate to him, because although this story is about a young person who lost their father, we all [have] lost something, we all have been through sudden grief and horrible trauma. Seeing a character go through it and survive and learn to get help and evolve to the next level, but also try to make it funny. Pete has this certain sense of humor that really made the writing feel funny, which was something I appreciated. But overall, I guess that’s what attracted me to the story, the sense of relatability and the humor of this story.

The King of Staten Island is now available on demand. Check out The Maroon’s review of the film.

"The King of Staten Island" Review: For Pete Davidson, It’s Not Easy Being a King