The University Must Disband Its Private Police Force

As the nation reckons with its relationship to largely unaccountable, racist law enforcement, the University of Chicago must do its part to bring justice to the South Side by abolishing UCPD. 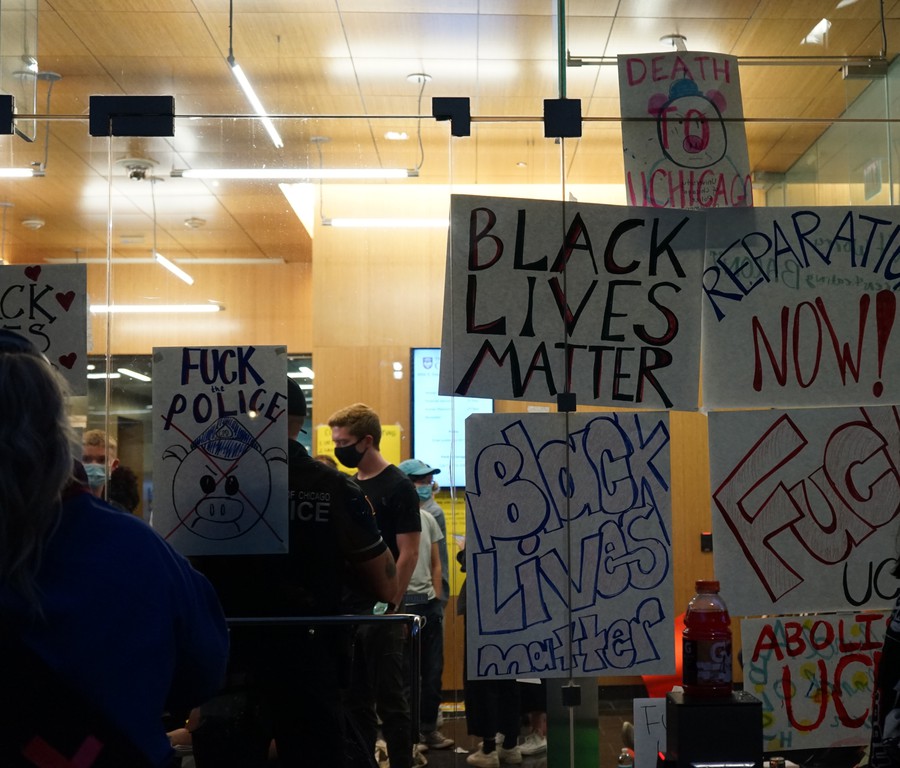 Protesters with #CareNotCops stage a sit-in in the lobby of the UCPD headquarters.

The University of Chicago should abolish the University of Chicago Police Department (UCPD) and replace it with an unarmed emergency response service better trained and equipped to handle particular, commonly occurring University-related situations. The UCPD has been, and continues to be, one of the main agents of the University of Chicago's history of racial injustice on the South Side. Community members at UChicago and its surrounding neighborhoods have been aware of this for many years, and the University can take action on police brutality by disarming and disbanding the UCPD. Disbanding and replacing the University’s private police force would place the area currently patrolled by UCPD under the jurisdiction of the Chicago Police Department (CPD), and will not by itself solve the numerous problems endemic to the CPD. However, by disbanding the UCPD, the University can begin to make right its numerous historical wrongs perpetrated against South Siders.

The University has a long history of economic discrimination against Black people in Hyde Park through “urban renewal” and “land banking” efforts executed via proxy organizations. One of these is the South East Chicago Commission (SECC), which was founded in 1952 and, until recently, was almost entirely funded by UChicago. “Urban renewal” refers to the midcentury effort to clear out and redevelop low-income neighborhoods in cities. Between 1959 and 1970, the University of Chicago led a program in Hyde Park and Kenwood that “displaced more than 4,000 families, or approximately 12,000 individuals; 58 percent of the displaced were families of color,” according to a University of Richmond study. The SECC also tore down 101 acres of property and over 600 buildings between 1952 and the mid 1960s in pursuit of preventing “white flight.” The University has also tightened its grip on the South Side through “land banking,” or buying large amounts of land for future development, and has reneged on its 1964 agreement with what is now The Woodlawn Organization (TWO), not to develop south of 61st Street (although some Woodlawn residents have encouraged this). In addition, UChicago simultaneously supports the proposed Obama Presidential Center and refuses to work with community members in the Obama Community Benefits Agreement Coalition, who have proposed a Community Benefits Agreement (CBA) to ensure they will not be displaced when the Center is built.

Though the UCPD traces its origins to armed security guards for campus buildings hired in the 1930s, it took its current form in the 1960s and was fully certified as a law enforcement agency by 1989. Today UCPD officers patrol from South Cottage Grove Avenue to South Lake Shore Drive and from 37th Street to 64th Street. UCPD officers are a daily presence for the 65,000 people who live in this area—most of whom are not affiliated with the University of Chicago—and many of whom are Black. Residents in this extended patrol area with no relation to UChicago have limited ability to hold UCPD accountable, largely due to the UCPD’s standing as a private police force, which precludes their records from being subject to the Illinois Freedom of Information Act.

The recent history of the UCPD exemplifies their continued mistreatment of Black community members. As Colette Robicheaux (A.B. ‘15) expressed in a 2014 op-ed for The Maroon, “the UCPD exists to protect a privileged portion of the population and be actively suspicious of the other category of citizens. The line that separates the protected and the criminalized falls along clear racial and class divides.” In 2004, Clemmie Carthans, a Black first-year graduate student in the SSA, was walking to meet a friend at 3am when he was stopped by a UCPD officer and asked for his ID. In 2010, Mauriece Dawson, a Black fourth-year student in the College, was arrested in the A-Level of the Reg, where at least 10 witnesses saw the officer put Dawson in a chokehold. In 2013, Toussaint Losier, a Black grad student, was peacefully protesting for the addition of a Level I trauma center to the University of Chicago Medical Center when a UCPD officer was captured on video pushing him before arresting him. Witnesses allege that the officer struck Losier further. At the time of his arrest, Losier was serving on an administrative committee investigating the UCPD’s tactics in Dawson’s arrest three years before. At that same protest, a UCPD detective infiltrated the group in the guise of a protestor, and three other Black people were also arrested, including a 17-year-old student of King College Preparatory. In 2018, a UCPD officer shot Charles Thomas, a fourth-year student of color while Thomas was experiencing what his family identified as a bipolar episode. Thomas’ roommate alleged that he had sought assistance from Student Counseling Services (SCS) just a few weeks prior to the shooting. The University’s police force is not exempt from systemic, institutionalized racism, and many Black students have been mistreated by the very institution they pay money to attend.

It is important, in writing this call to action, to acknowledge the ways The Maroon’s editorial decisions have negatively impacted Black community members. In February 2019, The Maroon published a photograph of a young Black man, handcuffed, being led away from Saieh Hall by an officer of the Chicago Police Department (CPD). The young man, who could have been a minor, had not been charged with a crime. By publishing his photograph, the paper put his future at risk and “fed into a narrative that treats young Black men as de facto criminals,” as former photo editor Zoe Kaiser noted in her 2019 call for the photo’s unpublishing. The photo remained on The Maroon’s website through at least the end of Winter Quarter 2019 before it was taken down. This is not the only contribution The Maroon has made to racist media narratives about crime on the South Side, though it looms large in our institutional memory.

As with many issues of social justice at UChicago, students have demanded better from administrators for years. #CareNotCops, a joint campaign run by Students Working Against Prisons and UC United, has been leading the charge to abolish UCPD, and organizers recently released a list of demands to defund and eventually disband the UCPD. In response to administrators’ refusal to engage with students and community members about policing, activists demanding a public meeting with Michelle Rasmussen and Kenton Rainey occupied UCPD headquarters for 20 hours on June 12. Organizers have been demanding substantial changes to UCPD for years, and we encourage students to get involved with these long running police abolition efforts—and administrators to break their habit of rebuffing students.

As we mourn the deaths of Ahmaud Arbery, Breonna Taylor, and George Floyd, and countless other Black Americans who have been killed by white supremacy and law enforcement in the United States, The University of Chicago has a unique opportunity to take action against police violence in Hyde Park and the South Side by disbanding its private police force. The nominal function of the UCPD, to serve and protect the University community, can be better accomplished by unarmed employees. The UCPD commonly responds to calls regarding theft, students asking to regain entry into locked buildings after personal belongings have been left behind, parties and noise disturbances, and are used to help control traffic. None of these duties require lethal force. In calling on UCPD officers to be generalists, responding to calls for a variety of situations we lose the opportunity to best address specific situations.

After disbanding the UCPD, the University should create a new emergency response and management service with employees who are better equipped to handle particular, commonly occurring university-related situations. Currently, if a student undergoes a mental health crisis in which they may be a threat to themselves or others, a UCPD officer is sent to escort them to the hospital. Rather than sending armed police officers into these sensitive situations, the University must invest in 24/7 emergency response mental health counselors specifically trained to assist students. The University’s security guards stationed at numerous intersections on campus demonstrate that campus services can be accomplished by University employees who don’t carry weapons. By disarming and disbanding the UCPD, the University of Chicago can take an active stance against police violence and institutional racism, and work toward providing campus services that meet the specific needs of the University community.

News Editor Pranathi Posa recused herself from this editorial because of ongoing commitments to news coverage of policing in Hyde Park.