With "Under My Influence," The Aces Reshuffle Their Artistic Legacy 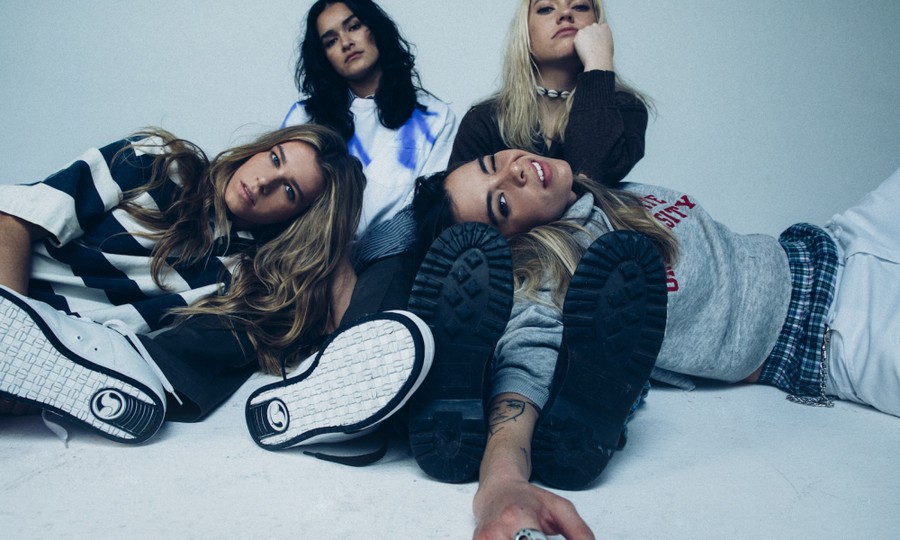 Alisa Ramirez told Gay Times, "It just felt really important to tell our stories to their fullest, to be truthful and to put it in the music because so many young fans need it. It’s us doing our part to represent.”

Courtesy of Indie is Not a Genre

The Aces are back and better than ever with their sophomore album, Under My Influence. The band—made up of lead vocalist Cristal Ramirez, guitarist Katie Henderson, bassist McKenna Petty, and drummer Alisa Ramirez—first came onto the alternative/indie scene as The Aces with their debut EP I Don’t Like Being Honest in 2017. In 2018, they released their debut album, When My Heart Felt Volcanic, a record characterized by its buoyant pop-rock sound. Under My Influence, however, finds The Aces in new territory, both in music and in message.

The album itself begins right where When My Heart Felt Volcanic ended; the first track and lead single “Daydream” evokes a summertime feeling with its upbeat melody and lighthearted lyrics. Going into the second track, “New Emotion,” we begin to see the sonic evolution of the band and the new themes they explore in this album. Termed as a part two to “Bad Love” in an interview with Gay Times, “New Emotion” builds on the idea of falling in love with someone unexpected. While this was explored in the previous album, the new track represents the band’s aim to go deeper and explore different emotions. The track itself features a suave guitar riff that is representative of the sleek and debonair feel that dominates Under My Influence.

The next two tracks, the timely “My Phone is Trying to Kill Me” and captivating “Kelly,” begin to show the extent of The Aces’ creative exploration. “My Phone is Trying to Kill Me” features a heavy bass that gives the track an edgy quality fitting for its topic: feeling like your phone is out to get you, from showing you pictures of exes on social media to ultimately causing you to miss out on the here and now. “Kelly,” which is characterized by its reggae influence, is also groundbreaking for the band, though in a different way. The track is the first to focus on a same-sex romance. “In the past, we understood that The Aces was representing all four of us, so we kept it a little more vague,” Alisa Ramirez told Gay Times. “It just felt really important to tell our stories to their fullest, to be truthful and to put it in the music because so many young fans need it. It’s us doing our part to represent.” Only four tracks in, it’s evident how much authenticity matters to the band. It’s something that sets this album—and this band—apart. “Kelly” isn’t the only song on the record that sets out to do this; “801,” a reference to the band’s Utah roots, is about breaking out of where you came from and feeling comfortable with yourself. Centered around band members’ experiences at a gay club in Salt Lake City, the song has a universal feel to it despite the specificity of its setting. Though subtle, it feels like an anthem, sure to resonate with its listeners.

While I was aware of the new sonic influences that were creeping into The Aces’ second album, their fifth track, “Can You Do,” completely stopped me in my tracks. It was unlike anything I’d ever heard before from the group; bold and energetic in both its sound and its lyrics, it’s the song that cemented this record as something truly unique. The confidence that “Can You Do” exudes in its assertion of sexual agency is only one of many examples featured on Under My Influence. Additionally, the self-assurance that the band has in this record is one they’ve learned to draw on in different ways. For example, while “I Can Break Your Heart Too” is essentially a heartbreak song, Cristal Ramirez has described it as also being about “claiming your power.” The band subverts the stereotypical heartbreak trope into something more: an assertion of power. It’s an interesting—and rather uncommon—twist. This redirection is representative of the band’s newfound confidence, and just one example of where their confidence can take them artistically.

Under My Influence also sheds light on the band’s ability to write lyrics that capture a variety of emotions, from moving to a new city to experiencing a love so pure it feels like “Going Home.” This diverse repertoire highlights the group’s maturity and versatility, made

noticeable by the contrast created between tracks, especially when considered in light of the record’s final track, “Zillionaire.” Despite the weight of the lows, the album ends on a high note in more ways than one. “Zillionaire” focuses on the importance of friends and family, especially in the face of the temptations of fame. The levity of the track’s message is reflected in its sound: upbeat pop, with odes to disco and soul music. While it may be the final track, “Zillionaire” feels more like a beginning than an ending.

Having written over 60 songs since the release of When My Heart Felt Volcanic, it’s clear that The Aces are just getting started. If Under My Influence is any indication, their influence is one that will be felt for some time.