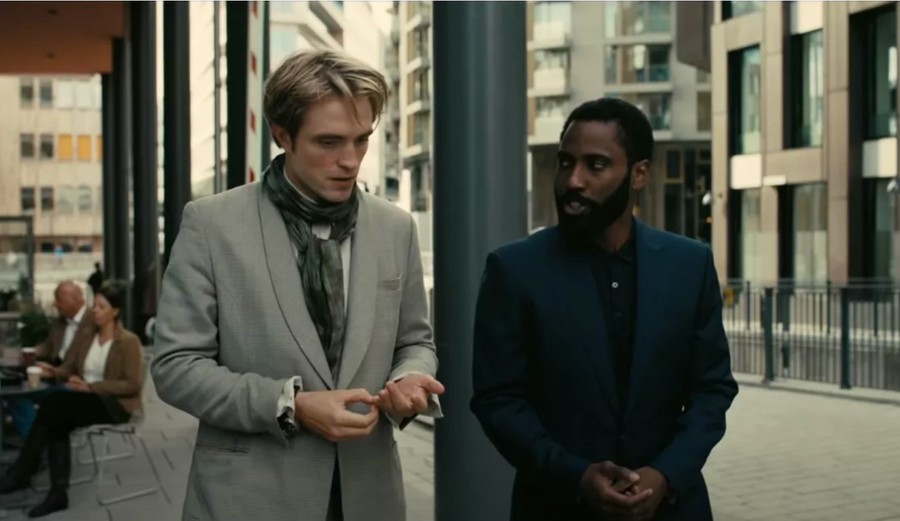 What ensues from "Tenet"'s premise is a devastatingly complex espionage thriller, filled with suave, charismatic operatives and wicked, accented villains with nothing less than the fate of the world, of course, hanging in the balance.

Anyone familiar with Christopher Nolan’s work will be aware of his infatuation with time—its mechanics, its philosophy, and above all, how it shapes the human experience. In Memento, he played with notions of memory and time, and experimented with narrative nonlinearity in the process. In Inception, he played with perceptions of time at different levels of consciousness. In Interstellar, he played with the physics of time while also exploring the more human side of relativity. Even in Dunkirk, he introduced an unconventional temporal element into his conventional war narrative, winding together three stories that take place over the course of a week, a day, and an hour.

It is therefore surprising that it has taken 11 features for Nolan to experiment with going backwards in time—not narratively, which of course he did with Memento, but physically. The plot element that propels Tenet, Nolan’s latest work, is “inversion”: reversing the entropy of matter. Whereas time travel science fiction typically involves jumping across time, from point to point, Tenet instead involves reversing its very flow. What if we could not merely leap backwards in time, but live it in reverse?

What ensues from this premise is a devastatingly complex espionage thriller, filled with suave, charismatic operatives and wicked, accented villains with nothing less than the fate of the world, of course, hanging in the balance. Tenet revolves    around an undercover operation to stop an apocalyptic event arising from the discovery of inversion. The film’s lead (John David Washington), known only as the Protagonist, is tasked with getting to the bottom of the nefarious activities of Anglo-Russian oligarch Andrei Sator (Kenneth Branagh), who is thought to be somehow facilitating this temporal Armageddon. Assisting the Protagonist in his covert operations are the smooth-talking heist choreographer-cum-physicist Neil (Robert Pattinson) and Sator’s estranged wife Kat (Elizabeth Debicki). The how, the what, and the why of the temporal apocalypse are mysteries that are to be solved by the viewer as the story progresses.

I have seen this film twice. The aforementioned how, what, and why were spectacularly obscure the first time around, and became clearer (though certainly not crystal) the second. To a greater extent than any of Nolan’s past work, Tenet requires and benefits exponentially from multiple viewings. Whether a viewer will find this a feature or a bug will depend on them—and will certainly correlate with their thoughts on Nolan’s previous work. The film’s labyrinthine narrative, which needs to be parsed out and pieced together independently by the viewer, will infuriate hardened Nolan skeptics (of which there are legions) and delight his ardent fans (of which there are legions). Few filmmakers can boast a more polarizing œuvre, and Tenet is no exception. It is, for lack of a better word, his Nolan-iest film to date, doubling down on all of the cinematic elements that his critics abhor and his disciples fetishize.

This includes Nolan’s penchant for overwhelming barrages of sound. If you thought that the swelling horns from Hans Zimmer’s Inception soundtrack were excessive, steel yourself; Ludwig Göransson’s soundtrack is far more ear-shattering. This would not be a problem in and of itself if the thundering electronic beats did not repeatedly overwhelm the film’s diegetic sound. There are swathes of Nolan’s signature explanatory exposition that I missed altogether on my first viewing because it was simply too damn loud to hear.

Tenet is completely unimpeachable, however, regarding its breathtaking visual construction. The film’s mammoth $205 million budget comes through in the sheer opulence emanating from every corner of the screen, as the characters, decked out in the most spectacularly tailored of suits, prance across the globe from London to Mumbai to Oslo to the Vietnamese coast. It is littered with stunning action sequences, from an initial heart-pounding raid of a Ukrainian concert hall to a heist that involves crashing a plane into a hangar—for which, being slavishly committed to doing everything without excessive aid from CGI, Nolan opted to use a real Boeing 747.

Indeed, it is through the film’s visual elements that Nolan makes best use of his temporal premise. It is no exaggeration to state that some of the action is completely unlike anything that has ever been previously put on screens. Explosions and gunfire are one thing; reverse explosions and reverse gunfire are quite another. Even the most incurious of viewers will be forced to at times stop and mutter to themselves, “How on earth did he do that?”

Nolan’s visual inventiveness, however, does not compensate for, and may indeed emphasize, his inability to fully explore his temporal premise. Inverting the flow of time has myriad philosophical implications pertaining to the nature of free will and cause and effect. While grazing these ideas from time to time, Tenet brushes them aside for the most part in favor of more—more plot, more action, more sound, more exposition. The magic of his previous films, most notably Inception, has stemmed from the combination of maximalism and depth; Tenet forsakes the latter for the former.

Almost more frustrating than the thematic shortcomings is the underuse of the prodigious acting talent on display. Commanding the screen with polished swagger, Washington possesses a charisma akin to that of his father Denzel. Pattinson, after spending years honing his talent in indie films such as Good Time, High Life, and The Lighthouse, is simultaneously playful and mysterious, excelling in his return to big-budget cinema. The real standout is the scene-stealing Debicki, who is characteristically resplendent and powerfully conveys the legacy of a psychologically and physically abusive relationship with her husband. Yet all three of these actors are constrained by Nolan’s screenplay, which reduces each character to a mere cog in the engine of the narrative, providing the actors with limited space to deepen and develop their performances despite their very best efforts.

These are not new criticisms of the acclaimed writer-director. Overwhelming sound design, a confusing narrative, lack of thematic depth, and underuse of actors peppered the critical responses to both Inception and Interstellar, his most high-concept films prior to this one. A charitable interpretation of this criticism is that these shortcomings are the cost of ambition, the price that must be paid to see these wildly inventive stories be given the kind of budgets that Nolan    commands. But the difference between Tenet and his previous ambitious work is the lack of soul. Both Inception and Interstellar leveraged their premises to force their protagonists to face an internal reckoning with past trauma. Tenet had an opportunity to do so in Debicki’s character, but squandered it woefully. All of the action consequently feels somehow bloodless, utterly bereft of stakes. Of course, the world is on the line, but for us mere humans, that is abstract. What is tangible—what makes for investment on the part of the viewer—is the human stakes of a narrative. In focusing on the macro at the expense of the micro, Tenet leaves those human stakes in the dust, and the viewer with them.