By Avi Waldman   and Matthew Lee 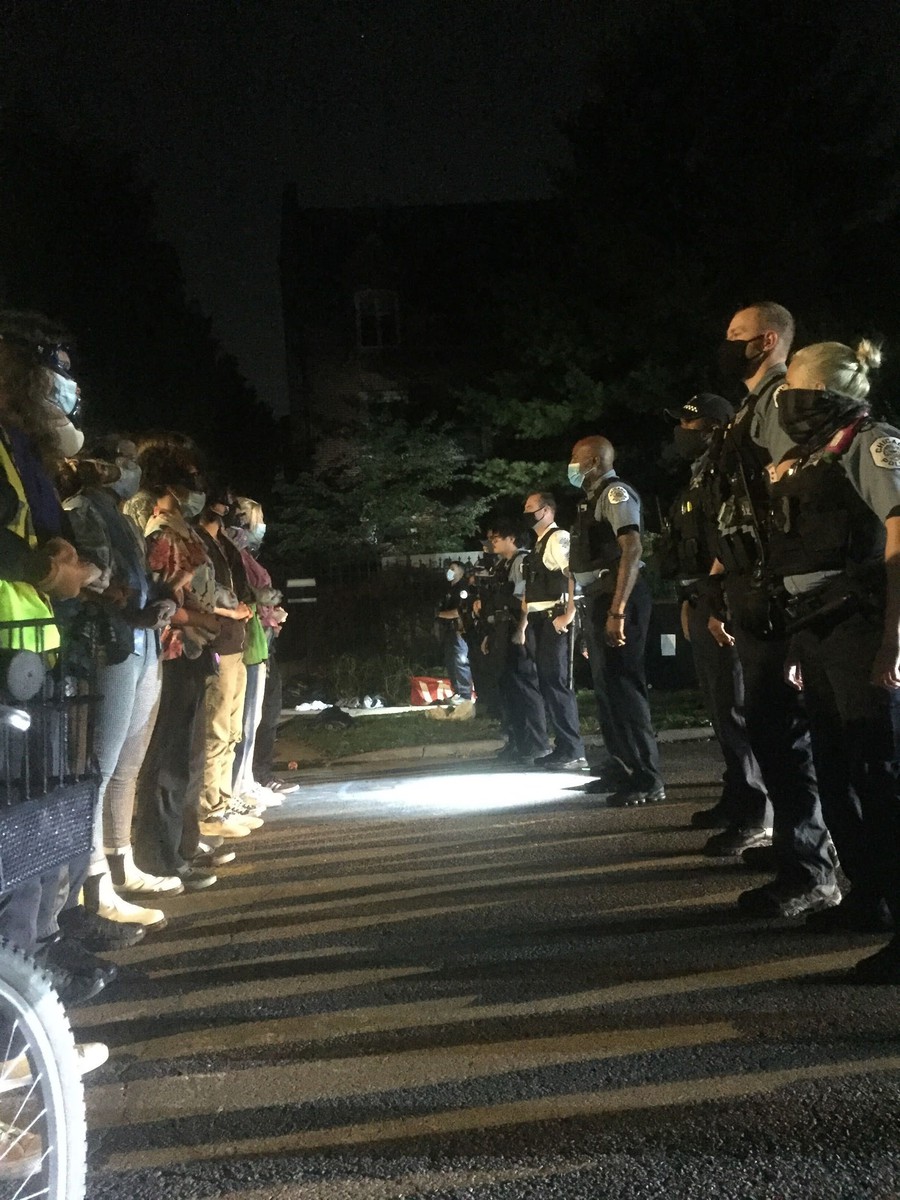 Protestors and police stand off on the evening of Friday, September 4th, 2020, as a weeklong occupation of the street near Provost Ka Yee Lee's home concludes.

#CareNotCops, a student organizing group, had been occupying the street in front of Lee’s house since Saturday, calling for a public and recorded meeting to address their demands: that the University defund the UCPD and create an ethnic studies department and cultural centers for students.

The block party followed a weeklong occupation of the space surrounding Lee’s home where protestors slept, ate, held meetings, and socialized. Though protestors spent most of the occupation gathered around Lee’s home, interspersed between were rallies involving speeches, hanging signs, chanting, and, at one point, shining lights into the Lee household’s windows.

In one episode on Wednesday, demonstrators zip-tied four people to a canopy in the center of the street as a challenge to the police and administration. While neither UCPD nor the Chicago Police Department (CPD) detained any demonstrators over the course of the week, police have sporadically issued dispersal orders and cleared demonstrators’ belongings from the encampment site, sparking confrontations.

In a statement sent to The Maroon on Saturday, #CareNotCops justified the occupation, writing that they were “there as part of the long lineage of students organizing alongside Southside communities in opposition to UChicago and its projects of extraction and displacement.”

On Friday evening, a male member of the Lee household emerged from the residence to urge demonstrators to stop what he characterized as the harassment of his family. “My kids are assaulted daily every time they walk out of the gate, and my little guy doesn’t want to come out any more,” he said. “He is traumatized. And so is my big kid.” Asked by a Maroon reporter to define the word “assaulted,” the household member said one of his sons was allegedly sworn at by demonstrators: “My big kid came out here, he took the mail, and there was something lying on the ground. And he picks it up, and somebody yells out: ‘You know what that says? It says F your mother.’” Demonstrators said they couldn’t recall an incident like this occurring. The male household member also urged protestors to put themselves in the shoes of his family, saying that they faced undue harassment during the occupation.

Responding to the man’s comments to The Maroon, #CareNotCops wrote, “To the provost’s husband, we say put yourselves in the shoes of Black young people who are profiled, harassed, and dehumanized daily by the UCPD…. The provost, her husband, and her neighbors are not innocent in the way that none of us are innocent. Without action and intentionality, we are complacent in systemic harm.”

As a capstone to their demonstration, #CareNotCops organized a “block party” on Friday night, billed as a “housewarming party” for the encampment. That evening, demonstrators unveiled an outdoor “house” composed of different pseudo-rooms: living room furniture assembled on the sidewalk and a food table in the faux kitchen on the street.

Friday evening’s events featured, at times, more than 50 demonstrators. Around 3 p.m. on Friday, a Dean-on-Call hand-delivered a letter to #CareNotCops from Lee, restating her willingness to meet with them in private as part of the previously-announced community listening sessions. Organizers rejected the offer, citing the provost’s insistence that the University would not consider disbanding UCPD and the fact that such a meeting would not be recorded or open to the public. Until the early hours of the evening, the mood at the demonstration was upbeat, with demonstrators hanging glow sticks, balloons, and a piñata from the trees. Organizers played music and converted parts of the street into a makeshift dance floor. Attendees wore masks, and marshals circulated offering hand sanitizer.

At 8 p.m. on Friday, however, police officers issued their first dispersal order of the night. 30 minutes later, the party atmosphere had evaporated and police and demonstrators moved toward a standoff. After CPD issued three orders to disperse, protesters formed a barricade out of furniture and sandbags and faced off against a line of at least 25 police. In the next hour, demonstrators chanted and moved between the police line and the intersection of 50th Street and Greenwood Avenue before organizers led a march to UCPD headquarters. 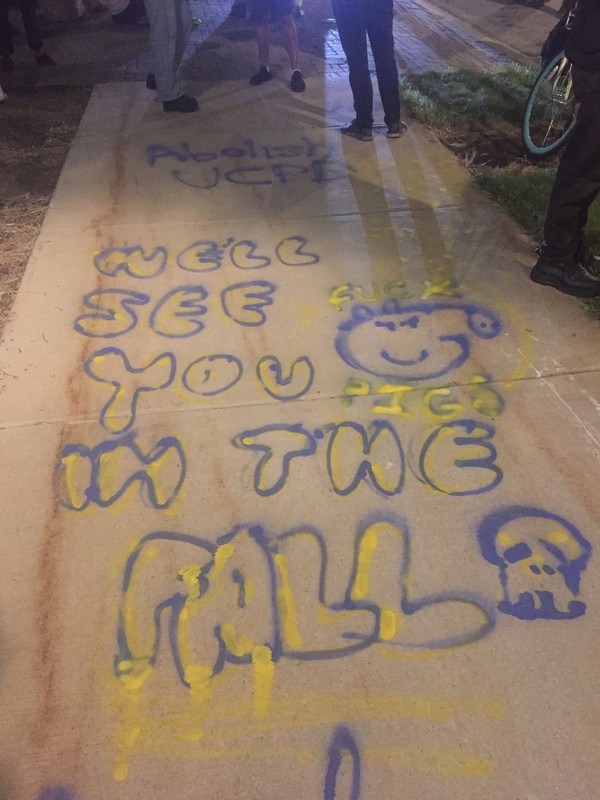 Graffiti left outside of UCPD Headquarters during a demonstration on Friday promises to "see you in the fall."

Gathered outside UCPD headquarters at 61st Street and Drexel Avenue, third-year organizer Alicia Hurtado declared that #CareNotCops had come out of the weeklong protest stronger than before due to the training of new organizers and the availability of more students once fall quarter begins. #CareNotCops also hinted at future activity, promising to “see you in the fall” as they chanted outside UCPD headquarters.