Everybody Should Be Talking About Jamie 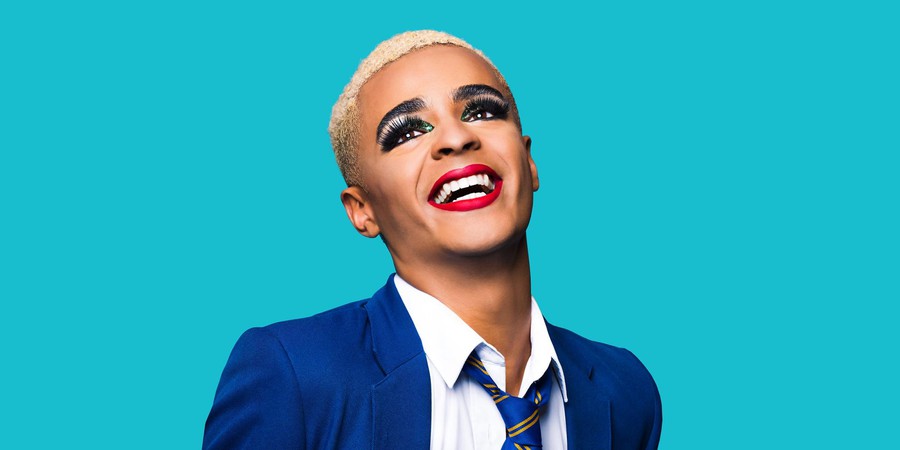 This article contains spoilers for the 2021 film Everybody’s Talking About Jamie.

Coming-of-age musicals have been all the rage for a hot minute—from Dear Evan Hansen to West Side Story, from The Prom to Grease, it hasn’t been hard to find school dances, bullies, and lockers on stage. You’d think pretty much every aspect of the Teenage Experience™ has been covered by this point, but the musical theater industry tends to have a trick (or ten) up its sleeve. Enter Everybody’s Talking About Jamie, a sparkling, powerful yet joyful testament to embracing your true self.

Everybody’s Talking About Jamie centers on Jamie New (Max Harwood), a 16-year-old gay British teenager from Sheffield who dreams of being a drag queen. Over the course of the film, he faces Dean Paxton (Samuel Bottomley), the meanest bully in school, and Miss Hedge (Sharon Horgan), his cruel Year 11 instructor. But, supported by Margaret New (Sarah Lancashire), his loving mother, and Pritti Pasha (Lauren Patel), his best friend, he overcomes these challenges until he’s stepped into the spotlight and—well—everybody’s talking about him.

In the vein of other recent movie musicals, Everybody’s Talking About Jamie began as a 2017 West End musical of the same name. Additionally, in 2018, a filmed version of the stage production aired in some US theaters. But the story itself isn’t fully original—it’s based on the 2011 BBC documentary Jamie: Drag Queen at 16, which follows real-life British teenager Jamie Campbell in a very similar story. Director Jonathan Butterell and writers Tom MacRae and Dan Gillespie Sells have been attached to the story since its inception, and the 2021 movie marks their collective feature film debut.

Having seen the 2018 filmed stage production, I thought I knew what to expect. The stage musical is bright and unapologetically in-your-face in classic musical theater fashion and, as a big Moulin Rouge! fan, I’d forgotten that most movies tend not to lean into their theatricality. Still, silly, spirited, and honest, Everybody’s Talking About Jamie is the coming-of-age movie musical we need right now, even though it lacks the teeth of the stage musical.

The film’s gentleness serves it well, though. Jamie is never a laughingstock, nor is he an idealized hero character. He’s simply a boy with a big dream, and, like any 16-year-old, he tends to get lost along the way to fulfilling it. I think this comes from the film’s basis in a real story—unlike Dear Evan Hansen's recent film adaptation, which has notably been thoroughly panned for its tenuous-at-best plot and almost-30-year-old “teenagers.” Indeed, Everybody’s Talking About Jamie avoids the second problem entirely: though Harwood was 22 at the time of filming, the rest of the teenage cast (including Patel) were clearly either in or freshly out of secondary school.

The choice to cast young actors in this film paid off. The Year 11 students’ arrival at their prom made me nostalgic for the days of arriving carefree to school dances with friends (and I really hated high school, so this is saying something), and their banding together to support Jamie wearing a dress (as himself, as he emphasizes) to the dance highlighted young people’s willingness to come together and support each other.

One of the new additions to the film heightened the deep, sad reality behind modern drag. In his search for the perfect dress to wear to prom, Jamie meets Hugo Battersby (Richard E. Grant), owner of the local drag shop, House of Loco. What ensues is the number “This Was Me,” the story of Hugo/his drag queen Loco Chanelle’s experience with the AIDS epidemic, which replaces the more theatrical “The Legend of Loco Chanelle,” a dramatic retelling of Loco’s fictional origin story. The montage throughout the song, which transplants present-day Hugo and Jamie into the midst of the AIDS epidemic and features “home footage” of a younger Loco Chanelle (John McCrea, the original Jamie in the stage musical), was heart wrenching. I’d learned a bit about that period of history by the time I was watching this film, but seeing the way HIV/AIDS affected people so quickly was new and, quite frankly, terrifying.

Reasonably, Jamie is slightly spooked after learning about how much more there is to drag than being “a boy who wants to be a girl sometimes.” Drag is revolutionary, which Pritti reminds him while encouraging him to keep going, as he is who that young Loco and her friends were fighting for. Armed with this knowledge, Jamie gains a shining confidence that shows most at his first show, where he finally names his drag queen Mimi Me, since, as Hugo/Loco prompts him, when Jamie does drag, it’s all about him. (A quick side note: the real-life Jamie Campbell’s drag queen is named Fifi la True)

However, the movie all being about Jamie comes at Pritti’s expense. The only moment where Jamie truly does something for Pritti occurs in the first ten or so minutes of the film. Dean Paxton comes up to Pritti and Jamie’s lunch table to harass Pritti, and Jamie tells him off so powerfully that all Dean can call him is “gay,” which, to Jamie, isn’t even an insult because he’s been out since age 14. For the rest of the film, though, Pritti serves as emotional support (as seen immediately after the first drag shop trip) and gives up things that are important to her (like time to study for a maths exam she needs to pass to become a doctor) in order to be there for Jamie.

Another of these moments is when Jamie is trying to figure out how to draw on eyebrows for his drag makeup and pulls Pritti into a staff bathroom to help him. Miss Hedge finds and confronts them, and Pritti is forced to make the excuse that she’s been using Jamie as a model for her art exam, which leads into the number “Work of Art.” Contrary to the upbeat-sounding tempo and lyrics of the song, it’s actually quite threatening as Miss Hedge escorts Jamie to the art classroom, showing him off as a “work of art” to the entire school. The cinematography the cinematography was impeccable to the point of being disorienting: Jamie is thrust into moments that call back to various works of art in his journey. Upon arriving in the art classroom, featuring drag queen Bianca del Rio as the teacher, Jamie first invites the entire class to his drag show and then reclaims being a work of art for himself. Jamie is now in control, and the cinematic aesthetics shift accordingly throughout the final dance sequence of the reprise.

Overall, Everybody’s Talking About Jamie is a bubbly, heartfelt movie that highlights what is so enticing about musicals about teenagers. When done well, the characters are human, and the storylines are unique. What makes Everybody’s Talking About Jamie so successful in this regard is that it doesn’t center purely around the High School Experience™, which is not inherently dramatic. But its finale at the school prom is still effective: prom is a concluding moment in high school, and the cinematographic choices involved elevate the event from a simple dance in a gym. The final number is joyful and reminds us that it’s always possible to find “A Place Where We Belong.”