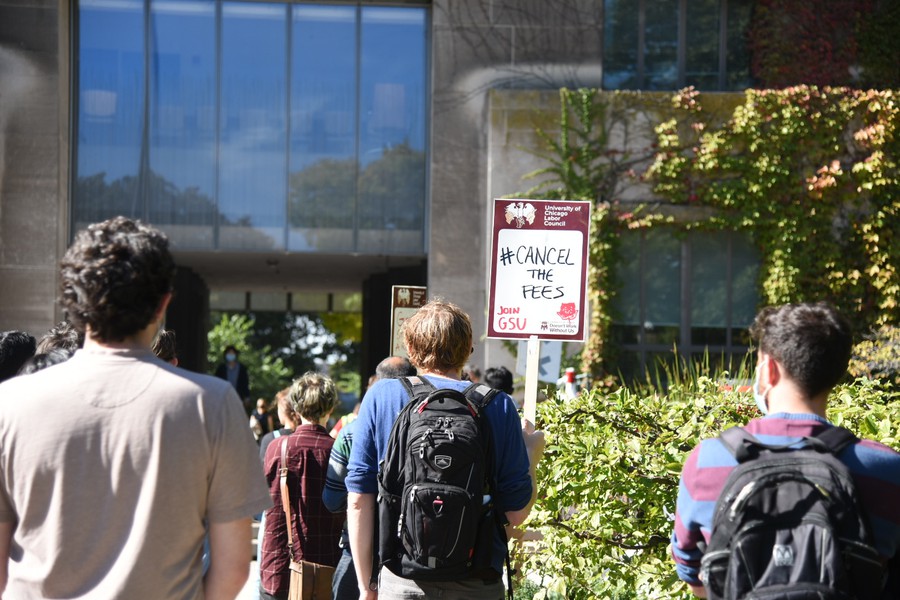 Graduate students and supporters protest against the Student Services Fee at a rally on October 19, 2021, in front of Levi Hall.

Activists from Graduate Students United (GSU) and members of the University community gathered for a rally outside Levi Hall on Tuesday, October 19, to commemorate four years since the group’s vote to unionize.

“This event is about reminding us of our institutional memory,” GSU co-president and department organizer Michael Stablein Jr. told The Maroon.

Speakers at the rally reiterated their promise to withhold the Student Services Fee (SSF), a quarterly cost issued to graduate students by the University. During the event, attendees also recited chants in support of unionization, GSU’s long-awaited recognition by the University, and the abolition of the University of Chicago Police Department.

“We’re here to reaffirm our commitment to not giving away our paychecks, to not giving up to Student Services Fees one more time for services that we do not receive, that we certainly did not receive during the pandemic. [It’s] a certain amount of money that the University feels it must have even though it has an $8 billion endowment that took no hit during the pandemic,” Stablein said at the beginning of the rally. 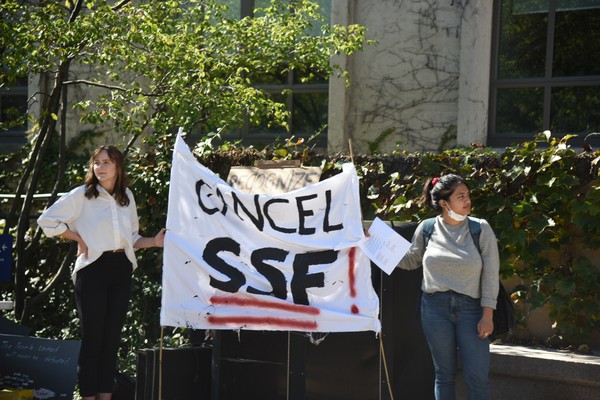 Graduate students protest against the Student Services Fee at a rally on October 19, 2021.

Much of the activism led by GSU in recent years has centered on the SSF, which this year totals $432 in the fall, winter, and spring quarters and $331 in the summer quarter. According to the Office of the University Bursar, the SSF helps finance “the many services dedicated to enhancing the quality of student life and campus activities,” which include support services like UChicago Student Wellness and Student Disability Services and extracurricular programming like Undergraduate Student Government and Graduate Council.

In an interview with The Maroon ahead of the rally, GSU communications secretary Laura Colaneri called the SSF “a garnish on people’s wages.”

Stablein said that he had been withholding the SSF since the fall of 2020, when he was at home attending classes via Zoom.

“Today, I’m pretty angry, but I’m also proud. I’m angry because a month ago, the University decided the $1,500 that I was withholding, the $1,500 that they call the Student Services Fee [and] that I call my paycheck, that $1,500 was just too much money to lose,” Stablein told the crowd, citing an email he received the previous month from Shea Wolfe, dean of students in the Division of the Humanities, threatening to reallocate his teaching and withhold his paycheck if he did not pay the fee. 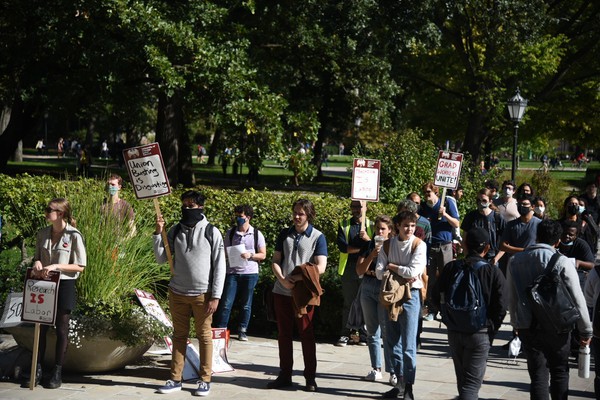 Graduate students and supporters rallying in front of Levi Hall on October 19, 2021

Computer science and statistics professor Yali Amit spoke next, emphasizing the importance of graduate research assistants (RAs) and teaching assistants (TAs) to faculty members and discussing the administration’s rocky relationship with GSU. “This University wouldn’t be able to do anything without your work,” Amit said, addressing the graduate students in attendance.

“Knowing my colleagues in the experimental sciences, none of the labs would work without RA work. They [would] just collapse. But beyond the TA and the RA, the whole intellectual environment would collapse without young minds coming and fertilizing this place.”

Despite the unionization vote passing in 2017, the University continued not to recognize GSU. By that point, Donald Trump had become the U.S. president, and during his tenure, the National Labor Relations Board attempted to overturn the pro-union ruling made under Barack Obama’s presidential administration, though it did not succeed.

“Rather than recognizing the free expression, the voice, the free speech, the democratic vote of their graduate workers, [the University] decided to contest it when they knew that we had a negative legal landscape to contend with,” Colaneri said.

Activists from #CareNotCops and National Nurses United (NNU) also spoke at the rally and outlined the goals they share with GSU.

“We demand that the University be controlled by the workers, neighbors, and students who make up the fabric of this community and not by the billionaire war profiteers on the Board of Trustees who are responsible for countless instances of violence and exploitation across the world,” #CareNotCops organizer Sophie Plotkin, a fourth-year undergraduate student, said at the rally.

“The University of Chicago is willing to steal millions of dollars from nurses and healthcare workers and other workers across campus,” NNU member John Hieronymus said.

“We have to keep up the fight, and we’re going to keep supporting your fight for your recognition and to take our workplace back and our community back…. We’re going to do that with direct action, strikes, solidarity, and mutual aid,” Hieronymus announced to resounding cheers before the attendees erupted into a chant of “Who’s got the power? We got the power!/ What kind of power? Union power!”

“Our peers are recognizing their graduate unions, and they’re negotiating contracts in good faith, whereas we’ve had an upward struggle here because of the obstinacy of administrators,” she said. “So we’re out here commemorating that and saying, ‘We’re not going away. You haven’t taken the wind out of our sails.’”