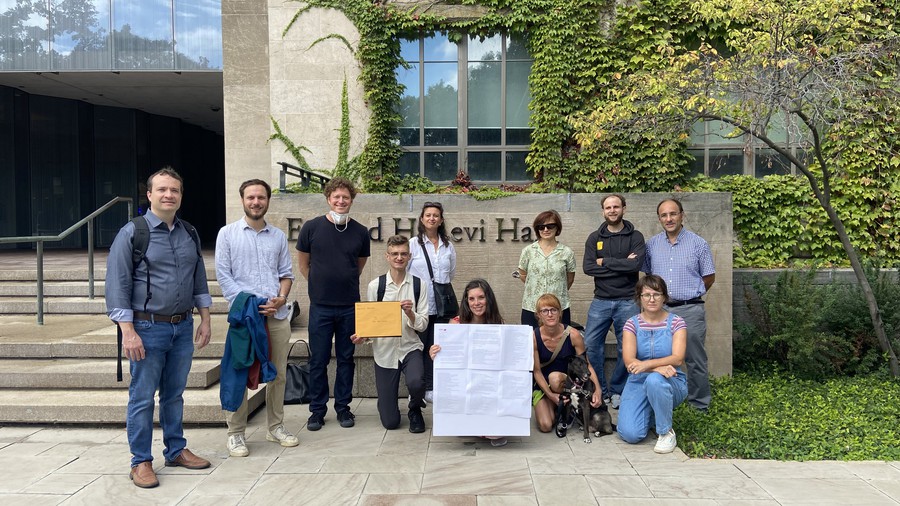 Faculty Forward members at UChicago delivered a petition to the university’s president demanding equal pay for equal work and parental leave for part-timers.

By Yiwen Lu   and Kate Mabus

In a tentative agreement on a new contract, the UChicago administration has agreed to provide better pay and more protections for non-tenure-track faculty after a six-month-long negotiation process with Faculty Forward, the union that represents more than 300 instructors teaching more than 1,500 courses at the University.

The new agreement, reached on September 24, promises non-tenure-track faculty, including part-time and full-time lecturers, a 7.5 percent raise within the next three years. It also outlines programs to increase professional development, extend parental leave, and improve retirement and insurance plans.

According to Stephen Todd, a spokesperson for Faculty Forward, the union has recently finished holding ratification meetings with its members. A final vote tally will be cast within a few days, and the new contract will come into force upon ratification.

Negotiations between Faculty Forward and the University have been ongoing since March. Faculty Forward collaborated with Service Employees International Union (SEIU) Local 73, which represents more than 31,000 workers in public service, to push for the new agreement. The union’s previous contract expired on April 30.

“What our bargaining team wanted to say to part-timers on the University of Chicago campus is ‘we see you and we’re advocating for you.’ The longer contracts, the higher pay, and the parental leave all go a long way toward making us feel like valued members of the university community that we have been committed to through our dedicated teaching,” part-time lecturer Darcy Lear said in an SEIU press release.

The University administration has also agreed to pay adjunct instructors in the Crown Family School of Social Work, Policy, and Practice comparable salaries to those in other University programs. Crown’s adjunct faculty receives 25 percent less each course than other University instructors, as cited by Faculty Forward in an open letter sent to President Paul Alivisatos in September.

“For too long the University of Chicago has said we were worth less than other instructors across the rest of campus, reflecting a wider societal problem of undervaluing the social work profession,” Dave Lowitski, a part-time lecturer at the Crown Family School, said in an SEIU press release.