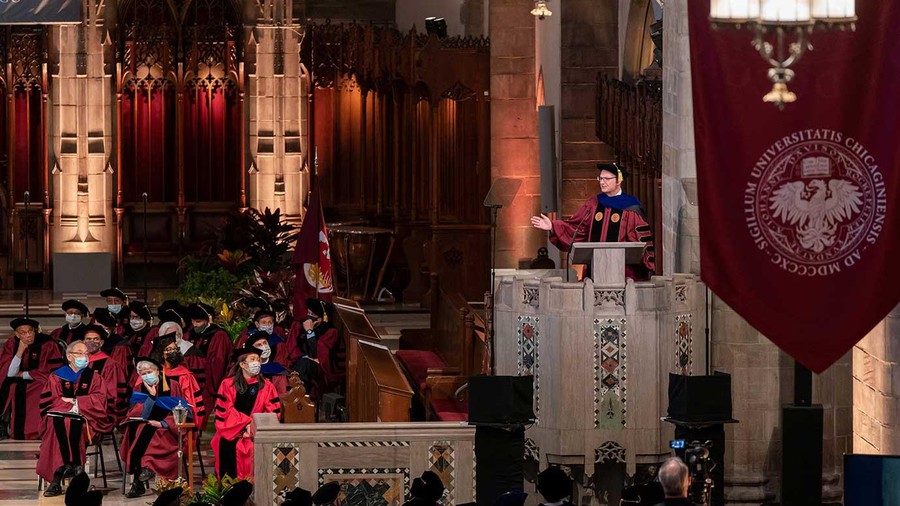 The University celebrated the inauguration of Paul Alivisatos.

The University celebrated the inauguration of Paul Alivisatos on Friday in the Rockefeller Chapel with many others gathered at watch parties at Mandel Hall and Max Palevsky Cinema.

Before he was appointed as the 14th president of the University of Chicago, Alivisatos (A.B.’81) was the executive vice chancellor and provost of the University of California, Berkeley. He previously held many faculty positions there, such as professor of chemistry and materials science & engineering, and served as the director of the Lawrence Berkeley National Laboratory.

The 535th convocation began with “Crescat scientia; vita excolatur,” a carillon fanfare composed by University Professor of Composition Augusta Read Thomas. The piece was named after the University’s motto, which translates to “Let knowledge grow from more to more; and so be human life enriched.”

Victoria Prince, marshal of the University, first welcomed those watching: “The many parts of our university, joined by our friends from other institutions and our city, come together to welcome Paul Alivisatos and listen to his vision for our university and the many opportunities to come.”

In his inaugural address, Alivisatos focused on the significance of realizing the University’s core values. He noted the inauguration is “far more than the welcoming of a new president, it reaffirms the values that shaped this university.”

Alivisatos spoke of creating an engaged community, saying “it is imperative that we fully engage with the world around us.” He then praised the University as a place where “some of the world’s best thinkers, scholars, researchers, educators, analysts, advocates, artists, entrepreneurs, and creators are unified by a distinctive culture and a set of core values.”

Alivisatos also acknowledged the University’s influence on the South Side. “As we deepen our engagement with our neighbors, we must examine, acknowledge and reflect upon our past actions with regards to development and housing on the South Side,” Alivisatos said. “These are essential steps to be better listeners and partners with our neighbors who bring enormous creativity and resilience toward the vision of a vibrant and thriving community.” He also supported the University’s commitment to diversity, affordability, and remaining an active partner with other institutions.

The alma mater was then played by University Organist Thomas Weisflog, accompanied by members of the University of Chicago Motet Choir.

The ceremony closed with a benediction given by dean of Rockefeller Memorial Chapel Maurice Charles, closing words by Prince; and a recessional by Weisflog.