In a message to fellow student government members, former USG president Parul Kumar said she had not enjoyed USG work and wanted to spend the remainder of her fourth year on other pursuits. 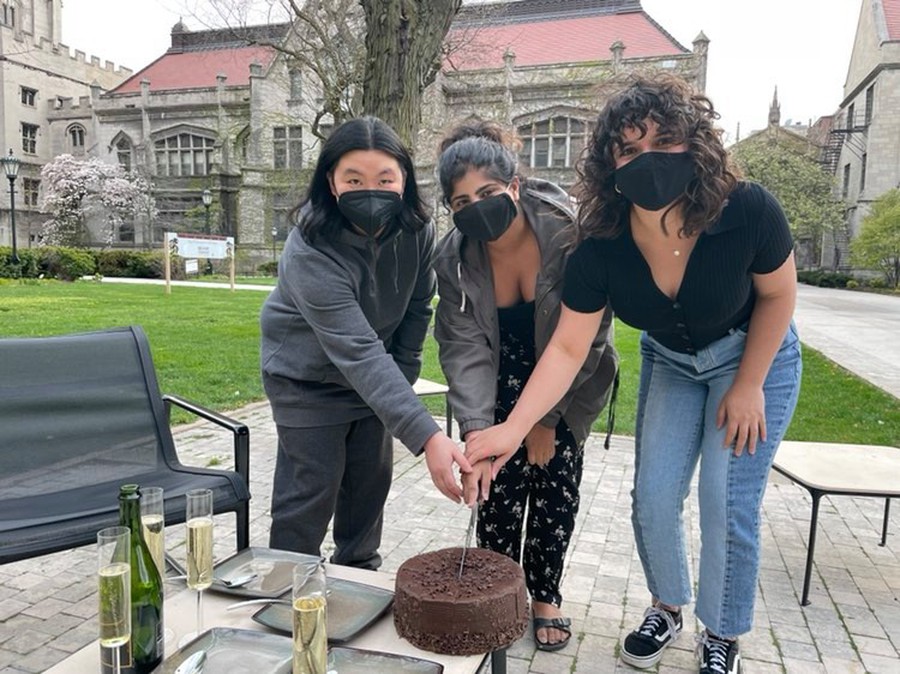 The Thrive slate sharing a cake at the quad per SG tradition after their election win.

Undergraduate Student Government (USG) President Parul Kumar has resigned. In a message to a USG group chat on Saturday, Kumar wrote, “I quit. USG hasn’t been something I enjoy at all and since this is my last quarter of classes, I want to spend my time in college doing the things that make me happy.”

In her message, Kumar said she would stay involved with “things [she has] wanted to work on,” including Greek life policy, a project to provide emergency funds to survivors of sexual violence, and a forthcoming report on marginalized students. She said she spoke with the Sexual Assault Awareness and Prevention Committee and the Committee on Marginalized Student Affairs about these projects prior to announcing her departure. Kumar is the co-president of the Phoenix Survivors Alliance.

Kumar followed up the announcement with a statement released on Sunday. In the statement, Kumar said her tenure as USG president was "the loneliest, most devalued, and excluded I have ever felt during my time in this University," citing cyberbullying against USG members on forums like UChicago Secrets. Kumar wrote that she does not believe that USG members are bad people, but that "the kinds of attitudes that propel people into leadership positions are oftentimes the same that makes others feel small." She added, "I really hope that instead of rushing to figure out who replaces me, steps can be taken to first make sure whoever they are feels supported and valued enough to want to stay."

Executive Vice President for Internal Affairs Allen Abbott told The Maroon that “most people in USG were surprised by her decision to resign, but we completely respect the decision. It’s been a very hard year for everyone and Parul is very involved in the community, and she plans to remain involved in her core project areas.”

College Council (CC) Chair Marla Anderson, a fourth-year, will become the acting president. Abbott emphasized that Anderson is only filling the position until CC can meet at the start of winter quarter and determine how to fill the vacant position: “CC chair is more than a full plate, and we want to emphasize the temporary nature of her filling the role.”

In a statement on Instagram, the USG cabinet explained that the cabinet and College Council will not convene to make a decision about Kumar’s permanent replacement until after the new year “to respect Winter Break after a difficult quarter for the entire student body.” They noted that the replacement decision will be made in a meeting open to the public.

The Thrive slate also faced controversy prior to the start of its tenure when it released a statement calling for “a free Palestine,” which some USG members claimed had been issued unilaterally. A resolution to retract the statement ultimately failed.

Kumar also announced her resignation in a tweet from her personal Twitter account. “I want to be the person to break the news that I quit USG! I’ll release a formal statement later, but I’m taking the rest of today to take care of myself.”

This article has been updated to reflect a statement Kumar released on December 19.