Institute of Partisans: Why UChicago’s IOP Should Abandon Its Non-Partisan Approach

The IOP lacks the educational focus to truly serve students. 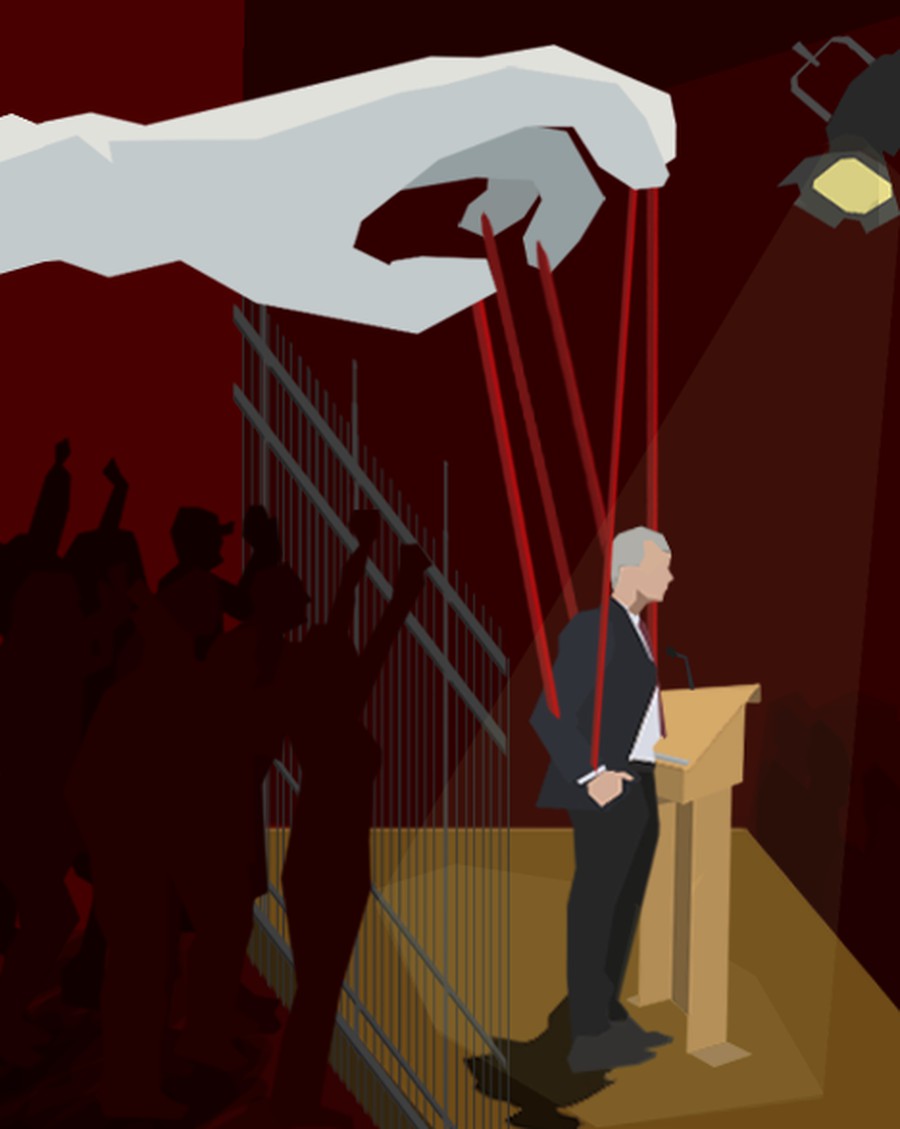 On January 28, former Secretary of Defense General Jim Mattis spoke virtually with David Axelrod at an event for the Institute of Politics (IOP), of which Axelrod is the director. Two weeks after an insurrection at the Capitol incited by the president (an insurrection which Axelrod himself called “the emblem of this most corrupt, chaotic and destructive of presidencies”) former Trump cabinet members are seeking redemption by distancing themselves from the 45th president.

The IOP has hosted no shortage of divisive speakers. In the past, The Maroon Editorial Board has advocated for ending off-the-record chats with visiting speakers in favor of on-the-record, public conversations. I am not here to denounce any particular speaker or argue that General Mattis should not speak at UChicago. Instead, I want to ask why the IOP continues to profess a stance of “non-partisanship” while hosting associates of overtly fascist leaders and neoliberal politicians who exploit Africa, Asia, and Latin America (the Global South). Rather than having a clear political education vision for students, it merely claims vaguely that students will learn from speakers. This provides an easy way to justify bringing whomever the IOP’s board wants to. Without a student-centered pedagogy, the IOP facilitates a mutualistic relationship between political elites coming to rehabilitate their images at the IOP and Axelrod seeking to uplift his profile and that of the IOP, resulting in students being neglected in the institution’s function.

If the IOP wishes to be a beacon for political discourse, it should abandon this framework of non-partisanship and instead seek to tell the truth about politics. Leaving behind non-partisanship is not about picking one ideological framework but is instead about practicing a pedagogy of political education that first and foremost seeks to inform students and local community members with nuanced, non-establishment perspectives about the world. Rather than consistently bringing some former House Rep or political strategist to campus, the IOP should prioritize the organizers, writers, and scholars who do work on the ground, people willing to put their lives on the line for their respective political struggles. Doing so would provide students with the necessary tools to engage with politics as citizens of the world.

For an organization based at a university, the IOP has no clear pedagogical vision. Although it states that “The nonpartisan Institute of Politics at the University of Chicago is an extracurricular program designed to ignite in young people a passion for politics and public service,” it has no mention of what educational philosophy grounds the work that it hopes to accomplish. Even if there are speakers being invited, civic engagement opportunities, internships being offered, or fellowships for politically-related actors, what purpose do these opportunities serve in the context of education? The Center for Race, Politics, and Culture here at UChicago notes in their mission what they aim to achieve and how they attempt to do that. They are clear that they facilitate both student research and faculty involvement in order to produce “engaged scholarship that rejects the false dichotomy between rigorous intellectual work and community activism.” Any of the characteristics of a program that centers around student political education, whether it be research, student-faculty panels on political science, or producing its own scholarship, are absent in the IOP. Instead, it acts functionally as a glorified arm of the Office for Career Advancement, offering students networking and career opportunities and neglecting an opportunity to educate students.

Much like pursuing objectivity in the newsroom, pursuing a “non-partisan” understanding of the world is not just unhelpful, but flat-out impossible. It is impossible to be truly objective and it is impossible to be non-partisan; instead, one can be ignorant of or reluctant to understand the scope of the circumstances of a particular political issue. It is a choice to attempt to appease everyone instead of focusing on truth-seeking, and the result is a political project that inhibits its own ability to take stronger positions. This “non-partisan” framework also fundamentally fails to take into consideration the reality that some students likely do not have a partisan politic. The IOP does not offer a means towards engaging with students who do wish to better understand politics beyond red or blue. Assuming all students back a party, in conjunction with framing politics around non-partisanship, inhibits the IOP from engaging with an important demographic of the campus community. What “ignite[s] in young people a passion for politics and public service?” A thorough, comprehensive political education that teaches them everything in an honest, just manner. But maybe that’s not what the IOP really wants.

General Mattis is coming to UChicago after having resigned from his position in Trump’s cabinet in 2018 due to disagreements with Trump’s proposal to remove US troops from Syria. Mattis served in the violent invasion of Iraq which killed at least 650,000 Iraqis. He has also led the US’s Central Command, a military task force in the Middle East. Mattis’s role in harming people abroad under state direction is well-documented. Mattis didn’t leave his position as Trump’s expansion of family separation policies wreaked havoc, or after the Unite the Right rally in Charlottesville. Instead, it was Trump’s Syria policies that pushed Mattis to leave his position. Axelrod denouncing the events of the Capitol while uplifting people from Trump’s administration is a contradiction worth investigating. Axelrod, and by extension the IOP, had no issues condemning the riots of January 6, but at the same time failed to publicly address whether they plan on inviting politicians or media figures who supported the insurrection to speak in the future. Why does the IOP refuse to confront its own internal contradictions?

There has been student and public outrage about speakers at UChicago. Student protests and organizing, not administration concerns, were a major factor in how Steve Bannon almost came to speak at UChicago several years ago. That same level of scrutiny and criticism against speakers, however, did not come when former President Obama came to speak for an IOP event after decimating the wealth of Black families by bailing out the banks amidst the 2008 financial crisis. He came to speak while Chicago residents were organizing against the Obama Center, which will have displaced predominately Black residents here in the South Side. Both, for distinct reasons, must be ruthlessly criticized because they have done considerable harm (although the scale of Obama’s harm internationally is devastating). The conditions that led to these speakers’ invitations to the University must be examined. Now as the IOP partners with the American Enterprise Institute, offers internships this year at the Hoover Institute, and partners with possibly more conservative-friendly institutions all after Trump left office, the question is again necessary: What is the IOP’s agenda?

While we cannot ever fully understand the IOP’s intent, we can see its actions. Neither Mattis nor most other politicians who come to speak at UChicago bring with them novel insight for students: Mostly, they come prepared with talking points you can find anywhere else. Simultaneously, IOP speakers gain credibility by being invited to speak at UChicago. Effectively, a speaking slot here means they are offered a chance at redemption without ever facing any consequences for egregious political actions. Mattis is just one speaker. But months from now, or a year or more out, Trump’s affiliates could become IOP fellows, or even guest lecturers and faculty. For evidence of the likely trajectory of Trump’s former lackeys, look no further than how former Bush secretary of state Colin Powell. Powell has spent much of his post-bureaucratic career in relative obscurity even when we know he lied about Saddam Hussein having WMDs, leading to the catastrophic invasion of Iraq. Powell has escaped accountability, and in coming to spaces like the IOP, he can continue his public rehabilitation. The IOP will and has already begun to facilitate this with Mattis, and it is abundantly clear that the former Trump cabinet members are set to become the next Colin Powells.

If the IOP wishes to foster young people’s interest in politics and public service, they should host frontline organizers instead of politicians who’ve done considerable harm on the behalf of the American settler-colonial project, whether they are on the left, right, or center. Students stand to gain far more hearing from folks on the frontlines in Gaza or in Aleppo or in Venezuela than they do listening to a talk by nearly any US diplomat. There are hundreds of Black radical organizers in the South Side of Chicago who understand more about their communities than any professional politician ever could. Why are they not invited to speak at the IOP? The IOP can fulfill its mission by abandoning this stance of non-partisanship and instead seeking to give students a more thorough understanding of the world and help inform their perspectives. For political education to be fruitful, it must be centered on telling the truth about the world, in all of its imperfections, contradictions, and nuances. The IOP as it functions today merely gives politicians across the ideological spectrum a platform that will lend them legitimacy, regardless of their past actions. While Black radical and revolutionary organizers, communists, and socialists are not invited nor involved at the IOP, this non-partisan stance has still allowed right-wing fascists and politicians who have directed unconscionable violence against peoples abroad to have a platform. That’s the framework Axelrod has cultivated at the IOP.

David Axelrod, is the IOP really here to serve the students you claim you want to foster political education within, or are you here to preserve your reputation, the University’s reputation, and the reputation of political elites? Frankly, since the IOP’s inception, it seems your only focus and interest has been on the latter.

Noah Tesfaye is a second-year in the College.

An earlier version of this article stated, incorrectly, that the January 28 conversation between David Axelrod and Jim Mattis was recorded for an episode for the Axe Files, the IOP's podcast. In fact, the conversation was never made into a podcast episode. The article has been updated to reflect this change.