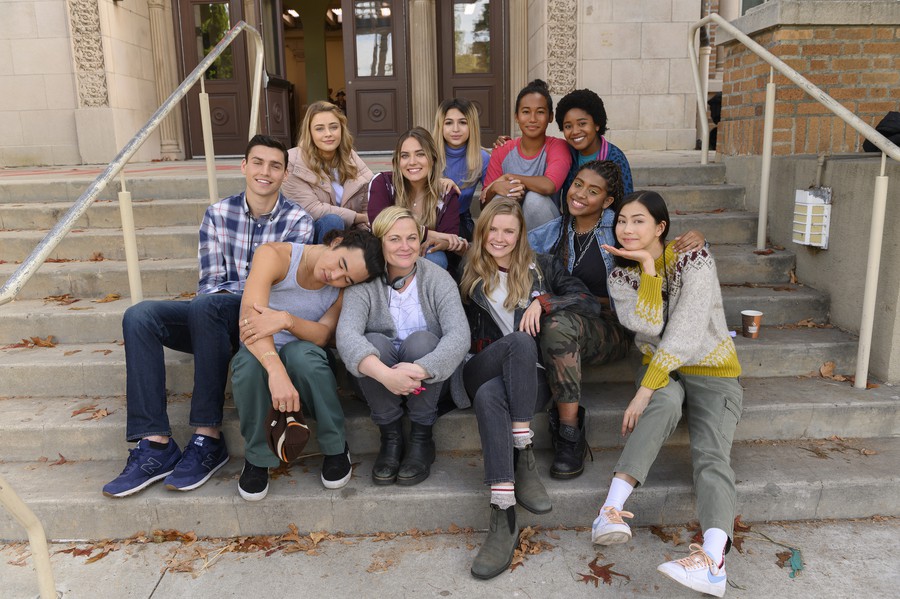 In conversation with The Maroon and other papers, Moxie costars Alycia Pascual-Peña and Hadley Robinson talk “girl power,” representation, and what seeing diversity on screen means.

This interview has been lightly edited for clarity.

The Chicago Maroon: Alycia, as a member of the Afro-Latinx community, did you find yourself drawing from any personal experience in your role as Lucy and how did you implement that while acting?

Alycia Pascual-Peña: Absolutely. One of my favorite parts about playing Lucy, [of which] there are just too many to name, was the fact that I got to represent my community. I am a proudly Black Latina woman and the fact that I got to have moments where I speak Spanish and moments where I'm dancing bachata and getting to show up fully as me was really powerful, and I let that drive me in the film—the fact that I'm not accustomed to seeing myself as a Black Latinx woman within a film, and the fact that I got to be powerful and unapologetic. I’ve taken [inspiration] from my own experiences where I felt microaggressions or dealing with oppression because of my racial and cultural identity. I let that really drive me on the importance and the gravity of having these certain conversations in the film. So I was very proud to play Lucy, who is this intersectional woman and calls out what's wrong around her. As a Latina, I've had to do that my whole life.

Jones College Prep Blueprint Newspaper: How did you feel about the portrayal of the love stories in the movie for both of your characters and what do you think it added or meant to the movie?

Hadley Robinson: I think Seth [Nico Hiraga]’s character was always kind of like a symbol of what it is to be a supportive boyfriend or an ally. He is always there for Vivian, but he also isn't afraid to call her out if she’s making mistakes. You kind of see Vivian grow through him in a way, and I think they learn a lot from each other. I think this love, this relationship in the film between Vivian and Seth is important because it doesn't seem like it’s men versus women in any way. It’s very pure where they’re very supportive of each other and learning from each other and allies for the other. I do love that aspect of the film because there is [also] some intensity and to have that sort of feeling of lightness is important. They're still young and they’re feeling all the feelings.

APP: I love that the film is so dynamic in a lot of ways. I think that there's substance to each theme that we’re trying to portray, specifically with the love stories. There’s so much love in the film. When I think of a love story, I think [of] the love between the women and just the unity and how that is beautiful, and their platonic love. And then we see romantic love between Seth and Vivian and how pure that is, and how they truly are just striving to grow together. And then my specific character, Lucy, she’s this radical feminist and, unfortunately, that's demonized.

We’re fed this falsehood that women who are very vocal and outspoken are callous and undesirable and not worthy of love, and then we see this beautiful moment where [my character] gets to kiss the phenomenal Anjelika Washington [Amaya]. I think that that just adds substance to my story and my character. I am outspoken and some people may deem me aggressive, unfortunately, but I’m worthy of love and I’m multifaceted. I thought it was very sweet and tender, and I hope that people feel empowered by that moment and feel empowered by all the love stories within our film. It was my first onscreen kiss and I was very proud of it because it was sweet and tender and not surrounded by any trauma—it was just these two women who desired each other and got to live in that in their youth.

There’s so much love going on in the film and that was definitely happening offscreen as well. We became a family and we just love each other. I think that that’s seen throughout the movie.

Blueprint: Alycia, how do you feel about the movie pushing the portrayal of strong Black women that will lead the revolution?

APP: It was imperative to me that we were celebrating and uplifting these Black women, and that they weren't just a commodity or figures that were disregarded. I think, unfortunately, as women—as Black women specifically—we continuously see films that don't celebrate us nor respect us for all of our beauty and all of our substance. So, I was really proud that Lucy in this film is respected as the catalyst that really encourages the women around her to come together, and the fact that she is outspoken and vocal and unapologetic and dope as hell, but also has a tenderness to herself and is vulnerable. As Black women, we are inherently a revolution and we should be respected that we are at the forefront of all of these movements. I think that our film is striving to do that so I’m very proud of that.

Kids First Chicago: Moxie has very diverse characters. It has an all-girls band, different races, different shapes and sizes, orientation, plus someone with a disability, which I rarely ever see. Can you describe how you think that that impacted the cast performances?

HR: I think that's what makes this movie so special—that it’s so inclusive, and you really see people from every background and culture, every shape, every color, come together and interact with and learn from each other. Not just within the characters, but also off set just as people; when we were rubbing shoulders and having conversations in between scenes, we were really learning from each other and then bringing that into the movie. I think that caused this new kind of energy. It’s exciting to learn from people who aren't like you, and it's really exciting to have friends who are completely different from you because there's that much more to learn. When the gap is bigger there's that much more to learn about humanity and people, and that's really exciting, and I think you can see it in the movie.

APP: It just made me so much more proud and humbled to be a part of the film. Not only is it centered on women—a film produced, written, and directed by women—but we are celebrating women in all of their womanhood and femininity. We have women of different races, cultures, backgrounds, abilities, [sexualities], and that is so powerful, especially because we haven’t seen [that sort of representation before]. I think it's a disservice to us as a society to not see women in their fullness and their true forms. The fact that I got to look next to me and see multiple Black women and their stories being told, it was powerful. It never felt like tokenism or like a sense of disingenuous diversity; we were really striving to make intersectionality the main focus. I think that there's so much power in that, and we're trying to progress the needle with the film and continue [having conversations on diversity, representation and social activism] and encourage people to have these conversations at home, to look at their own lives, and their own communities, to acknowledge the intersectionality of that.

Blueprint: Is there anything you wish had more of a spotlight or was gone into with more depth?

HR: I want to see more of Lucy. She really takes the movement and makes it into something. I feel like she needs a next chapter where you see her really make it something bigger. You see the beginning of that at the end of the film, but I think she needs more time. I think Claudia [Lauren Tsai] as well. I want to see more of Claudia and Vivian's relationship because I think there's a lot there. They’ve lived a life together, it's like a long-term couple. I think I could see more and more of that relationship as well.

APP: I selfishly—because I love everyone so much—just want to be able to delve into everyone’s stories; and, of course, more dance parties because who the hell wouldn’t love to continue to rock out with Amy and these amazing cast members. I think there’s so much that the film touches upon, but I would just love to learn about each character a little bit more. Maybe some scenes of the Moxie club coming together, because I thought [it] was really dope to see all these girls talk about how they wanted to implement change. There’s a scene in our film where they’re in this very masculine den and they’re kind of learning from each other and kind of saying, “No, I don't like that” and “That makes me uncomfortable,” and you don't know those things unless you have those transparent conversations. So maybe more moments like that.

Kids First Chicago: There are certainly lots of “girl power” scenes in this film. Which might be your favorite?

HR: My favorite scene to shoot, but also just to watch, is that final moment when we are all dressed up, all the female characters are dressed up, and they’re having a dance party—but that dance party feels a little different. It feels like this is them when they’ve really come into their own. This is them in a dream sequence where they are the best versions of themselves and the most free. I think that's a really important scene.

APP: Wow, there’s so many dance party scenes. I would say that scene at the end of the film and the other dance party where we have the Linda Lindas, a band of young women, perform “Bikini Kill”. [It] just allowed us to completely be free and liberated and get into it as a cast. All the dance scenes were definitely the favorites. They were so much fun and just very real because that was us in real time, you know, sweating and being together.