Stay-At-Home Order to be Expanded to Cover Off-Campus Students, Extended Until Wednesday

A stay-at-home order on undergraduate students that began April 7 will be extended through at least April 21. The city’s order will now affect off-campus students, not just those who live in on-campus housing, according to an email sent to all track and field athletes in the College by head coach Chris Hall and elaborated on by a later email from Dean Michele Rasmussen and Associate Vice President for Safety and Security Eric Heath.

A later email by Dean Rasmussen, sent to students on Friday afternoon, explained the University’s rationale. While administrators said that it appeared that the peak of UChicago’s infections occurred last week, cases can take up to 10–14 days after exposure to become symptomatic. To combat further infection, especially by the B.1.1.7 and P.1 variants, the Chicago Department of Public Health asked the University to extend the order through April 21. Genomic analysis of the recent cases to determine the origin(s) of the strain(s) is ongoing.

Other risk factors include university administrators’ determination that “there are multiple clusters, starting with individuals who were unknowingly infected over break.” There was “subsequent spread among students in smaller gatherings as well as larger parties,” Rasmussen wrote.

The restrictions, announced originally by Dean Rasmussen in an email to students on April 7, prohibited students living in residence halls from leaving their dorms except for food trips, medical appointments, and occasional walks for exercise. It also shifted all courses to a remote-only basis, closed seating in all campus dining halls, and canceled all non-curricular in-person programming for College students. While originally planned to end on Thursday, April 15, it was announced on Wednesday that the order would instead be extended until at least Friday April 16.

Rasumussen’s Friday email updated the University’s stay-at-home order restrictions. All undergraduate in-person research and student positions are suspended at least through April 21. Previously, the opportunities had been off-limits only to those undergraduates living in campus housing. The new order also will cancel all track and field practices and competition during the course of the stay-at-home order, per the email. Prior to the order, off-campus track and field athletes remained in practice and competition, holding a track meet as recently as last Friday.

To combat student stress exacerbated by the extension of the order, residence halls will open outdoor courtyard spaces to students and a special support session conducted by UChicago Student Wellness will be offered on Sunday at 4 p.m.

According to Rasmussen’s email, more than 60 percent of the cases in the recent spike occurred among students who had traveled in the past two weeks. It also reported that while the University’s initial investigation into the spike began primarily at parties, contract tracing has revealed that there appear to have been multiple sources of outbreak, beginning with students who had traveled during spring break. Prior to break, the University had asked students not to leave Chicago.

This article has been updated with information from an email to all students by Dean Rasmussen on Friday afternoon. 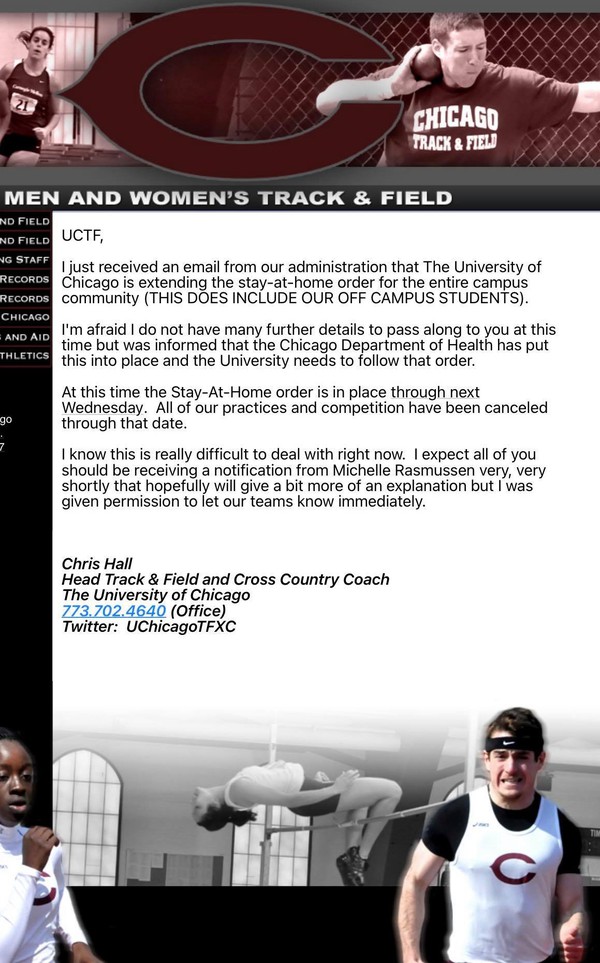 The decision to end the stay-at-home order two days ahead of schedule came after only one positive result was recorded out of 1,361 tests conducted Sunday.