Keeping An Eye Out For Emerging Talent From the Ground Floor 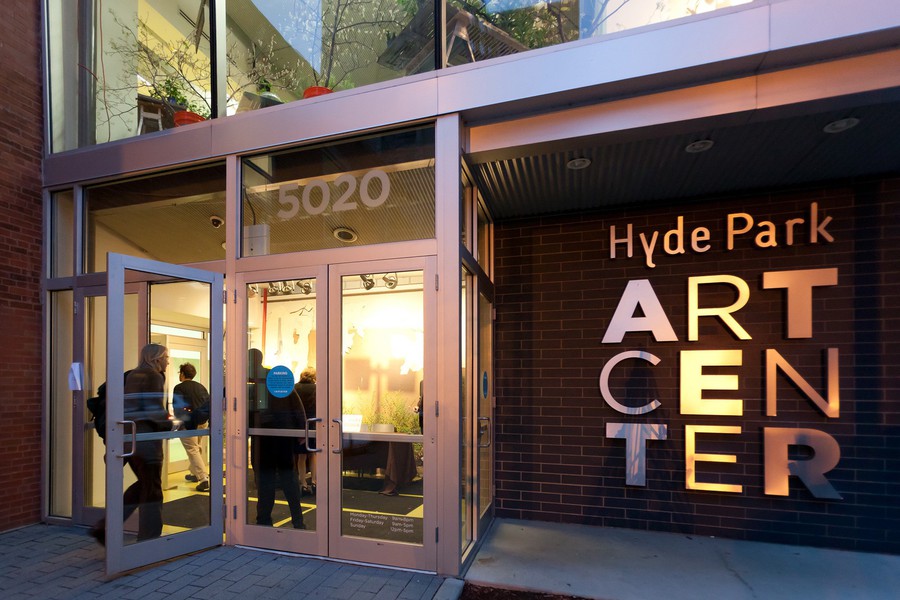 The Hyde Park Art Center (HPAC)’s Ground Floor exhibition, which gathers 20 of Chicago’s M.F.A. artists from the past two years on the same floor, serves as a Whitney Biennial for the emergent Chicago art scene. HPAC curator Allison Peters Quinn said to The Maroon, “The Chicago art landscape changes so much…it’s very much tied to…the five schools producing M.F.A. artists in Chicago.” These are the School of the Art Institute of Chicago, Northwestern University, the University of Illinois at Chicago, Columbia College Chicago, and the University of Chicago. But because the criteria for artists’ nomination is arguably ad hominem—alma mater and graduation year—the challenge for curators is reconciling artists’ works to create a unified exhibition while still giving each artist their full due.

The exhibition begins before you even get to the door. The center’s two-story glass facade reveals Cecilia Beaven’s vibrant jaguars, one of which protrudes in papier-mâché from bubbles of Starburst pink, orange, and blue. Checking in at the front desk, you’re flanked by Stella Brown’s composite cubes of rock, with titles such as “Discount Mega Mall” and “Museum of Contemporary Art.” Arrows on the electric lime floor lead you past Jessica Martin’s crayon shrines to Brooke Shields, an installation whose medium is labeled “woven video,” and grapes in HD as they rain onto a resting woman.

Still, the question remains: How does HPAC construct the show to honor each individual work, without creating a viewer experience that’s too distracted or diffuse? For the two University of Chicago alums represented in the show, Terence Wong (M.F.A. ’19) and Daisy Schultz (M.F.A. ’20), the answer is not only that it’s possible, but that HPAC has done it well. Schultz’s work greets viewers in the center’s foyer. Originally solely a photographer, Schultz now works in sculpture and photographic arrangements, which have translated into her collection Attachments. These commandingly orthogonal sculptures, as well as one wall work, reorganize the human body into something obscure and unfamiliar. Each piece is titled Attachment and a respective number, which directs viewers’ attention to the pieces’ detachment from the body: Each constituent photograph is a body part, but not a part of its original body; in Schultz’s rendition, bent fingers resemble spider legs or a curving staircase, and the lithe outline of a back could be a leather couch.

Schultz’s work is presented as a relatively unified corpus, perhaps deliberately apropos of the title Attachments. “[The HPAC curators were] like, This is probably the only piece in the world that could handle this electric lime green floor,” Schultz laughed. The placement surpasses a simple color complement, though: Approaching Attachments requires you to walk past Brown’s aforementioned Future Geology, polished cubes of rock with titles that suggest they were collected from demolition sites. The proximity of these pieces evokes their kinship, not just in the polished, squared-off forms but in the forms’ conceptual implications. None of the fingers in Schultz’s work are still a live finger, really—each image crops before it becomes a knuckle or a fingertip, and the photograph itself is detached from the original life it captured—but nor are they, still intact, not a finger. In the same way, Brown’s Geologies can no longer return to their original form or purpose, but they aren’t destroyed either, retaining the communal life of where they came from. Each artists’ cubes capture a life and a history within, transforming the purpose and significance of what it portrays without really transforming the thing portrayed.

“I believe the work has been installed quite faithfully, which is maybe a little harder with my work because of the technologies and media involved,” said Wong, the University of Chicago’s other representative artist. Of Wong’s three pieces in the show, two are stone sculptures of his ear mounted onto active microphones, one a hand-printed vinyl wallpaper patterned from a stucco wall. Wong said, “I was an abstract painter, and a lot of times people talk about the authenticity of a gesture, of a mark. And the workers, the builders of a stucco wall are craftsmen, trained in doing the gesture of putting on the plaster. For me, I see little difference between the value of the gesture of an abstract painter versus a stucco wall painter. Why do we think of one as authentic, and one not so much?”

If viewers aren’t meticulously checking the plaques, they might not register a common artist between the halves of Wong’s oeuvre, which are displayed on opposite ends of the center. “The wallpaper is not related to the ears, or at least I have not thought of them as related. If there’s a connection, I’m interested in [sound and gesture] as an ephemeral thing, and the difference and repetition of the actions,” Wong said. Even so, my first impression of the stucco pattern was as the helices of ears, or maybe cochlea.

Wong’s sound equipment sculptures sit in the main room, where green lights spike on their active microphones in time with visitor chatter. There’s an unplaceable hum nearby, which visitors can either ascribe to the art center itself—perhaps it’s the air conditioning, I thought—or you can figure out it’s Wong’s pieces that are emanating the sound by playing a personal game of hot-and-cold. “One of the differences between this work and the thesis, shown in 2019 at the Logan Arts Center, is that these don’t need to be performed. They are always active, although the sound is more lowkey…instead of the work I showed when I graduated, which is more full-blast. I’m thinking about eavesdropping, which is one of the most personal things you can do in our time,” Wong said. Though a handful of video works are dotted throughout the show, Wong’s works are situated next to the only screen playing audio, which requires the viewer to engage with the three sonic pieces. “That’s a smart choice on their part—it contributes to what I’m thinking with this work, the sound almost being an elemental aspect of the space, instead of being foregrounded. It helps the work assimilate into the space,” he said. “I’m grateful they’ve accommodated my, sort of…”

“Your madness?” Schultz supplied good-naturedly in his pause.

Wong laughed and continued, “They allowed for a sound piece that continuously makes sound, which in itself is quite generous, and I know a lot of places would not be as comfortable with that.”

Just as the exhibit manages loyalty to UChicago’s two alums, it similarly illuminates the work of artists throughout. In a dimmer corner of the exhibition, Percy Lam’s neon lights pop, and Efrat Hakimi’s “Voyeur” subverts the viewer’s role, forcing you to look through the subject’s blinds printed onto night black paper. Joshua Kent’s work, composed of such items as the lipsticked paper rinds of cigarettes, is littered throughout the walls of the center, as if one might find each piece and construct their own exhibition––as Kent appears to have constructed his work. “They put a lot of trust into us,” said Schultz. “They were like, Well, we chose you and what you were doing, and we don’t expect you to compromise.”