“Oh, What a Beautiful Mornin’’’ to Go See Broadway’s Touring Production of "Oklahoma!" 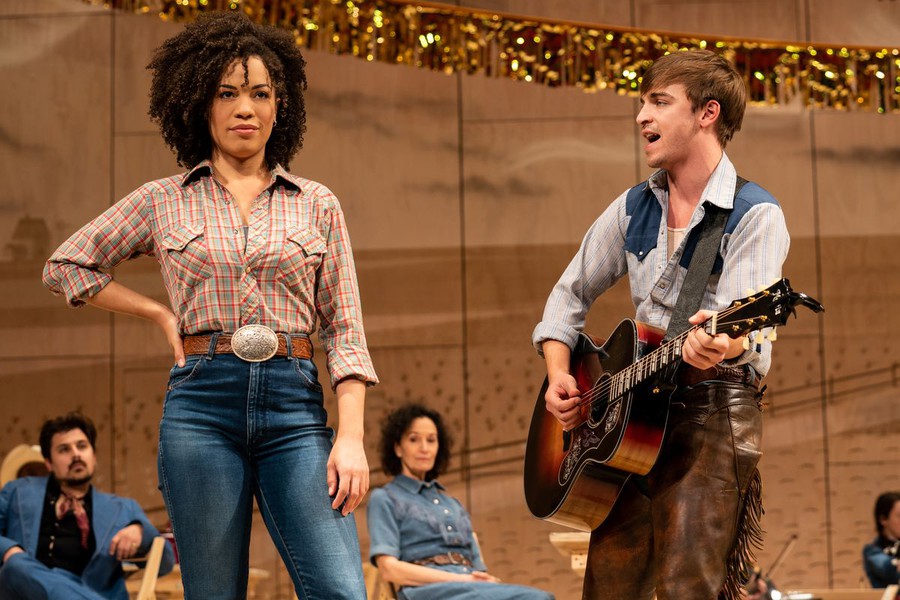 Sasha Hutchings and Sean Grandillo perform as Laurey and Curley in "Oklahoma!"

Courtesy of Matthew Murphy and Evan Zimmerman for MurphyMade

Many thespians would agree that Oklahoma! is, quite frankly, an outdated musical. Though at its birth, Oklahoma! was deemed artistically revolutionary as the first modern musical, it is clear that the work has evolved in the ever-changing theater world. Fortunately, through the vision of director Daniel Fish, Oklahoma! has expanded its commentary from an off-putting love story to a social statement on gun violence and the role of the villain in our stories.

For those who have never had the opportunity to see Oklahoma!, the storyline follows the “enemies to lovers” trope between Laurey, the sassy young woman of our story, and Curly, the cocky cowboy who believes “everything’s going [his] way.” Our villain, the farmhand Jud Fry, is depicted as a violent porn addict who dreams of marrying Laurey. Jud and Curly’s feud unfolds during the night of an auction and eventually, Laurey falls for Curly, angering Jud to the point of violence. Throughout the show we are also introduced to a secondary plotline: We meet Ado Annie, a spontaneous and impulsive young woman who must choose her lover. Does she decide to marry the always-moving swindler, who himself has been swindled into a relationship with Annie, or does she choose the lovesick but half-witted Will Parker? The secondary plot brings an exciting and rambunctious tone to the musical, one that I personally found more entertaining than the main storyline.

A large complaint of mine about the original production of Oklahoma! is that Jud is painted as this creepy, evil figure when he is, in fact, a human with needs and wants, just like every other character in the plot. His desire to marry Laurey is not unfounded; why do we allow the “handsome” Curly to creep on Laurey, yet view Jud as a villain when he does exactly the same thing? In this revival of the musical, there is a clear separation between the personas and actions of Curly and Jud. In critical points between Jud, Curly, and Laurey, Jud is displayed as creepy through a number of theatrical elements: The lights dim to a near pitch-black, Jud and the other characters of the scene whisper their arguments, pushing the audience to the edge of their seats in uneasiness, and on some occasions, a camera gets very close to Jud and display his off-putting facial expressions. Fish’s vision of Jud’s ominous essence brings the production to another level. Jud is no longer a character whose values are different from that of the rest of the cast, but rather truly a menace to society. In a way, Fish uses the outdated role of Jud in the original production to envision a far more understandable conflict to follow. He also posed the question: Is Curly a villain to some degree? Curly seems to care very little about Laurey’s traumatic experiences towards the end of the show. His hatred towards Jud overcomes his concern for Laurey, and he came off as an extremely unlikeable character in this revival. Curly’s controlling nature towards Laurey makes it difficult to support him as the protagonist.

Fish made interesting choices in his evolved production. I enjoyed the use of colored lighting to categorize certain scenes. Romantic scenes were characterized by bright pink lights overtaking the room, intimate moments between two individuals were expressed by a bright green light in which actors looked like black shadows, and truly off-putting and creepy scenes were completely pitch black. Furthermore, the use of gunshot noises was a surprise. In light of recent events, many musicals have opted out of using guns and instead have used other types of weapons that are perhaps less triggering. Oklahoma! does quite the opposite. Guns were used far more in this production than any other that I have seen. In fact, 114 guns are mounted across the stage throughout the production, and as shots are fired during the production itself, the sound is amplified. With this deliberate action, Fish makes a statement concerning the role of guns in contemporary society. Fish has previously claimed that, in its early years, Oklahoma! was meant to represent America of its time, so with that in mind, he wanted to reflect upon problems in America today. This was truly an awe-inspiring decision. 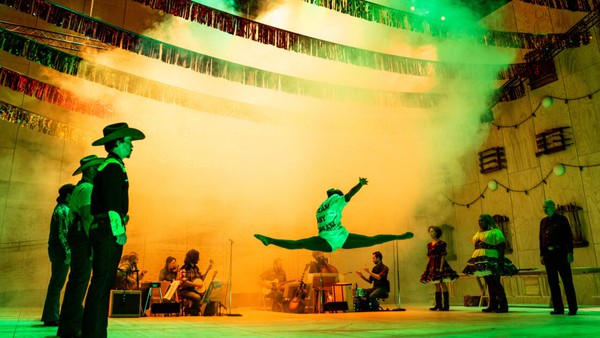 The cast of Daniel Fish’s Chicago production of "Oklahoma!"

Actor-wise, the choreography and the renditions of the classic music of Oklahoma! were wonderful. I found myself fawning over Curly’s (played by actor Sean Grandillo) hypnotic tone and his incredible skill with live guitar playing. Ado Annie (portrayed by the incredible Sis) had magnificent energy and gave the audience a break from many of the serious moments of the show. Of course, it is difficult to review Oklahoma! without at least mentioning the famous dream ballet sequence. Personally, I have never been a fan of contemporary dance and its relation to plots, but in this particular instance, I found myself incredibly impressed by the scene. It was vibrant, interesting, and, though perhaps a bit too long, completed the director’s vision of a modern Oklahoma!.

Overall, I was thoroughly impressed by this revival of Oklahoma! and found myself replaying moments of the musical in my head for days after the showing. Director Fish’s take on the classic Oklahoma! is a reminder that musicals are not grounded in the era of their creation but rather can be modernized to fit current societal issues and circumstances.