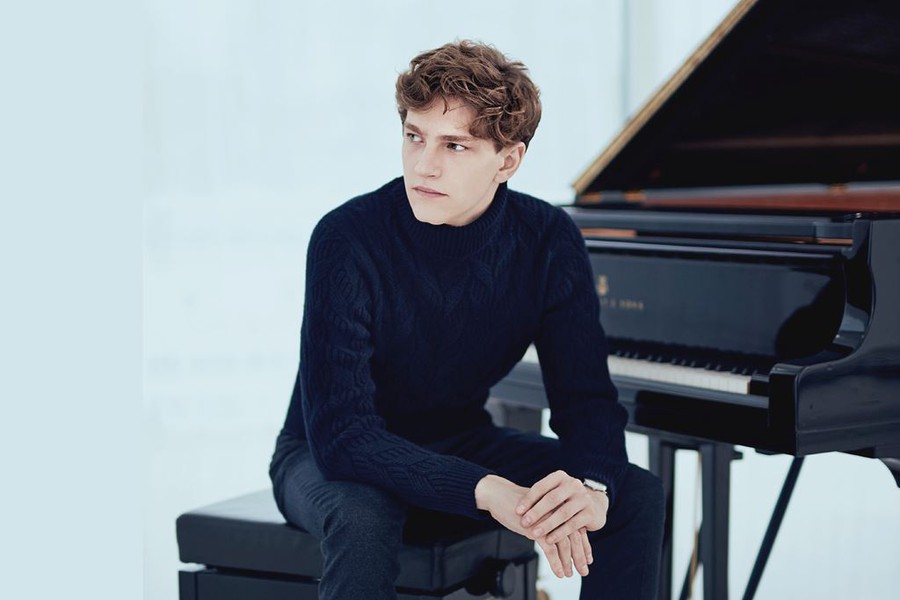 Lisiecki, a Canadian pianist of Polish descent, is a virtuoso in high demand.

It seems counterintuitive to hold a solo piano recital in an orchestra hall. There’s something distinctly imbalanced in having the more than 1,000 patrons in attendance at Symphony Center’s Orchestra Hall train their focus on a region of the stage no larger than 50 square feet. In that sense, perhaps Jan Lisiecki’s performance January 30 of the Op. 10 études and various nocturnes by French-Polish Romantic composer Frédéric Chopin had more in common with a stop on a pop singer’s album tour than with a traditional classical concert. Except, however, that there was no opening act, no orchestra for accompaniment, no words of explanation provided by the artist: just man and machine, pianist and instrument, performer and composer.

Lisiecki, a Canadian pianist of Polish descent, is a virtuoso in high demand. As a teenager, Lisiecki skyrocketed to fame for his performances of Chopin’s concertos, burnishing his reputation for sensitive, nuanced interpretations in the years since. Those qualities were evident as Lisiecki, now 26, began the concert with Chopin’s Étude No. 1 in C major. The cascading runs in the right hand inspired the “Waterfall” nickname for the étude, though most remarkable about Lisiecki’s performance was how he slowed that roaring waterfall down to a murmur at the end.

The subdued mood lingered as Lisiecki began the first nocturne in the program, Chopin’s posthumous C minor nocturne. Published in 1938, 89 years after Chopin died, the C minor nocturne is something of a black sheep: Its melody calls to mind the Jewish poem “Hatikvah,” since adapted as Israel’s national anthem, yet the transparent texture evokes the classical master Wolfgang Amadeus Mozart, one of Chopin’s greatest musical influences. Though the nocturne is simple from a technical standpoint, Lisiecki demonstrated that performing it masterfully requires more than just accurate fingers. His use of the mute pedal on the left side of the piano muffled the sound in the solemn passages, and at the more hopeful A-flat major section, Lisiecki turned his head skyward, as if seeing a ray of sunshine above.

One of Lisiecki’s hallmarks as a performer is the way he moves his body. For the second étude in the program—a wild, energetic showpiece with striking similarities to Nikolai Rimsky-Korsakov’s famed “Flight of the Bumblebee”—Lisiecki’s tousled blond hair bounced along to the chromatic scales, adding to the feeling of confusion and disorientation of the piece. But this confusion is finely controlled, like much of what Lisiecki plays. In the Nocturne in E major, Op. 62, No. 2, he projected the minor-key melody so clearly that the chords underneath it barely distracted from the theme. That said, his emphasis on the melody at times shifted the focus away from moments of intrigue. At one point in the middle of the piece, Chopin shifts from the standard harmonies of A minor to the almost dystopian alternation of German sixths and diminished sevenths, two of the more complex chords in Chopin’s harmonic arsenal. While I expected Lisiecki to wait before the change in mood, he instead dove right in, spoiling what could have been a moment of great surprise for the listener.

The third work in Op. 10, nicknamed “Tristesse” (“Sadness”), is perhaps Chopin’s most famous and certainly one of his most beautiful études. Lisiecki was careful to preserve the poignant lyricism of the étude even with his more daring artistic choices—a bouncier left hand and intense, almost anguished, banging at the discordant climax, as if a boat were riding on stormy seas. At the return of the first theme, when Chopin pivoted from sunnier major chords to the sadder C-sharp minor, Lisiecki took extra time to draw out the fall from hope into heartbreak. He finished the piece with the audience spellbound, then adjusted his bench, paused for a moment, and launched into the tempestuous Étude Op. 10, No. 4, this time mesmerizing with the immense clarity of his sixteenth notes.

It feels insincere to describe Chopin’s music in terms of colorful metaphors, but a truly outstanding pianist can indeed use the blacks and whites of the keys to paint a multicolored, three-dimensional picture. Listening to Lisiecki play Chopin’s Nocturne in C-sharp minor, Op. 27, No. 1, it’s hard not to think of images: the right-hand melody at the opening like ripples on a lake, the left-hand arpeggios after the con forza (with force) section’s booming octaves like evergreens jutting out from the morning mist, the languid plagal cadence at the conclusion like a prayer echoing through a cavernous sanctuary. Though nocturnes by definition lend themselves to darker colors—the Latin root nocturnus connotes the night—there’s a certain ethereal quality to Lisiecki’s interpretations. As he plays Op. 27, No. 2, he is still during slower passages, careful to move as few muscles as possible; it makes the brief flourishes of excitement even livelier, even more surprising to the listener. Pieces like Op. 10, No. 5, the distinctively joyous “Black Key Étude,” might be the best display of Lisiecki the showman, but the nocturnes are where Lisiecki the artist is most at home.

As much as I may be extolling the virtues of his artistry, Lisiecki is not perfect. The “Black Key Étude” was a touch sloppy, and individual notes were difficult to discern because of the breakneck tempo at which Lisiecki took it. He followed the searching and mysterious Op. 10, No. 6, étude with the famous Nocturne in E-flat major, Op. 9, No. 2, and it seemed Lisiecki knew that the piece was somewhat clichéd: His tempo was brisker and his touch crisper than those of many other interpretations. But perhaps he was simply saving his energy for the Nocturne in C minor, Op. 48, No. 1, which closed the first half of the concert. It begins and ends with the same melody—the first time anguished yet hopeful, the second time anguished and hopeless—and Lisiecki took great care to differentiate the two. I had to put my pen down and marvel as he approached the conclusion, a tour de force of technical difficulty. There were mistakes, yes—but they could be explained and excused by the almost primal energy with which he threw himself at the keyboard.

In his gestures at the keyboard, be it breathing as he ends a phrase or shaking his head as he executes a demanding run, Lisiecki injects life into the pieces of a composer who is, to put it bluntly, very much dead. Classical music, as a genre, is often caricatured as either gentle, unassuming lullabies or stuffy, pretentious symphonies, and the lack of words and tangible narratives in instrumental classical music—the majority of Chopin’s output—can make it difficult for the layperson to understand the complexities of the writing. A truly great performer can illustrate these intricacies to both trained and untrained listeners, and Lisiecki evidently succeeded in this regard: The applause began while his hands were still suspended in midair. Words like “epic, “unbelievable,” and “phenomenal” echoed throughout the lobby at intermission.

The second half of the concert was much like the first, and Lisiecki’s evocative yet controlled interpretations continued to enchant the audience. In the Nocturne in G minor, Op. 15, No. 3, Lisiecki balanced autumnal colors with a doleful melody that evoked “March” from Pyotr Il’yich Tchaikovsky’s collection The Seasons before pivoting to the more technical Op. 10, No. 7, étude. In Op. 15, No. 1, Lisiecki managed the rubato while flawlessly integrating the brisk ornaments into the relaxed melody. In Op. 10, No. 8, affectionately known as the “Sunshine” étude, Lisiecki lifted himself up from the bench during some of the more intense passagework; in Op. 10, No. 9, he looked away from the keyboard at similarly challenging moments in a display of bravura. Lisiecki’s confidence is clear, though it usually shines through subtly: In the Nocturne in B-flat minor, Op. 9, No. 1, he adopted a wide posture as the melody broadened, then straddled the line between sound and silence at the triple-pianissimo passage, then played the forzando chord a few measures later with just enough force that it cut through the arpeggiated accompaniment without obscuring it—choices that require the self-assurance that everything will go as planned.

Lisiecki, at 26, is in roughly the same stage of life as Chopin was when he first wrote the music in the program. Chopin died of tuberculosis in 1849 at the age of 39, so most of his œuvre dates to his youth or early middle age. The beauty and harmonic depth of Chopin’s work, especially in early pieces like the Op. 9 nocturnes and Op. 10 études, belie his youth, just as Lisiecki’s meditative interpretations might be more characteristic of a pianist decades older. The hallmarks of youth also include pure, unfettered emotions like the gaiety present in Chopin’s Étude in A-flat major, Op. 10, No. 10. Lisiecki is not immune to his own youthfulness: His initial tempo for this étude was unsustainable, and his second statement of the melody was noticeably slower. When he reached the end, he barely waited before beginning the Nocturne Op. 32, No. 2, in the same key, keen to move the program forward.

What Lisiecki unquestionably does well, though, is leaving his mark on the music. As is evident from his delicate voicing of the rolled chords in the Étude Op. 10, No. 11, each layer of his playing is carefully considered, each point of emphasis deliberately executed. In the middle section of the posthumous C-sharp minor nocturne, Lisiecki even deviated from the instructions of Chopin and his editors. The music stipulates that the second statement of the melody, in F-sharp minor, be played sotto voce, or “under the voice,” but Lisiecki instead chose to play it louder and with more involvement than he did the first statement in A major. Another departure came in the finale, Chopin’s rousing “Revolutionary Étude” in C minor, which in Lisiecki’s hands lacked the boldness and unbridled anger that characterize many of its interpretations. It might have evoked a diplomatic conflict rather than the big, bloody battles that inspired the étude, but it was still intense enough to satiate the audience, which gave him a deserved standing ovation. Lisiecki returned to the stage one last time for an encore in the form of the Nocturne Op. 16, No. 4, by Ignacy Jan Paderewski—a late 19th-century composer, noted editor of Chopin’s work, and briefly Poland’s prime minister after World War I.

For the first half of the concert, a boy no older than 10 sat at the edge of my row, watching Lisiecki’s every move. The significance of all Lisiecki’s artistic gestures might not have been apparent to me at that age, but the understanding that he’d done something great would have been abundantly clear. It’s magical to see a young star like Lisiecki carve out his legacy in plain view. To a music historian, he might be seen as the heir presumptive to a long line of Polish virtuosos and noted Chopin interpreters that includes Arthur Rubinstein, Krystian Zimerman, and Rafał Blechacz; but to the general public, he is an artist who keeps classical music fresh and accessible—the kind of performer that inspires the audience to return for more recitals.