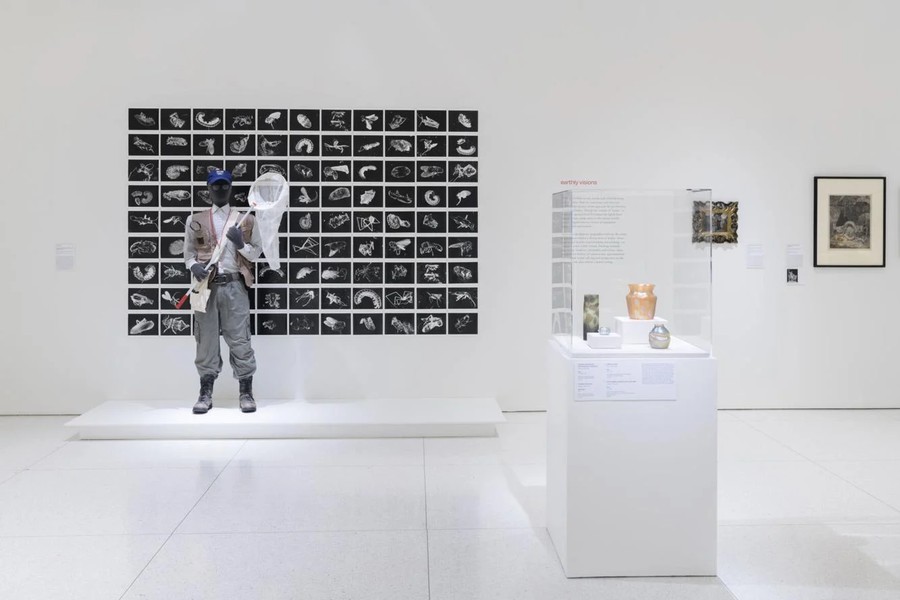 [“Unsettled Ground”] conceptualizes different ideas around how the environment shapes cultures and communities beyond the Western scope.

The light outside shines into the right-side gallery of the Smart Museum of Art, as exhibit viewers converse about which artwork they like best. As if some force of nature is in conversation with the exhibition, the attic light shines brightly upon all of the artworks in their different mediums (photography, woodcut print, sculpture, weaving), illuminating distinct narratives around environmental determinism: the belief that the environment, especially its physical factors, determine the patterns of human culture and societal development. Organized by the Feitler Center for Academic Inquiry, Unsettled Ground: Art and Environment from the Smart Museum Collection is collaboratively curated by Katerina Korola (Ph.D.’21) and undergraduate and graduate students from her seminar. The exhibit conceptualizes different ideas around how the environment shapes cultures and communities beyond the Western scope.

Before walking into the exhibit, I expected to see photographs of land art and overused affirmations around environmental justice. The message of most environmentally-focused exhibits tends to be conveyed by the same medium of photography, reminiscent of oil spill footage and aerial photography one sees on CNN. And yet, as I walked into the illuminated exhibition space, my expectations were subverted; my eyes scanned the room to see Sheila Hicks, Yun Fei-Ji, Ruth Duckworth, and other artists in dialogue about what kind of relationships they had or wished to have with the environment. The voices that were speaking to me in the exhibition were from different cultures, nations, and spiritual backgrounds. Moreover, the exchange between myself and each of the artworks was not monopolized by the same ideas—a mark of a successfully curated exhibition.

The artworks were organized into four categories: “No Man’s Land,” “Arts of Observation,” “Land of Work,” and “Earthly Visions.” Among the woodcut prints, pottery vessels, photographs, and sculptures, one particular artwork stood out to me more than the others—namely, Arthur Amiotte’s “Wounded Knee III.” 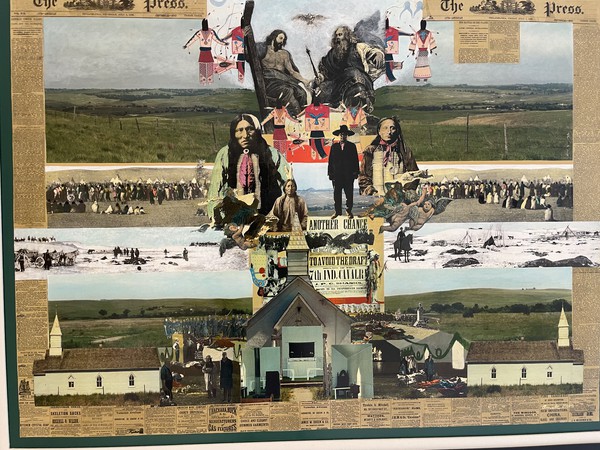 Among the woodcut prints, pottery vessels, photographs, and sculptures, one particular artwork stood out to me more than the others—namely, Arthur Amiotte’s “Wounded Knee III.”

As Western power predominates the written history, indigenous communities continue to pass down their histories orally and artistically. On December 29, 1890, at Wounded Knee Creek on the Pine Ridge Indian Reservation in South Dakota, the 7th Cavalry of the U.S. Army killed at least 150 men, women, and children—including Arthur Amiotte’s wife and baby daughter. Through a collage assemblage, “Wounded Knee III” conveys the deeply violent history of the Native American Land massacre at Wounded Knee Creek.

At the base of the collage are cut-out pictures of churches. The black shadings of the subjects against the white church walls brought chills down my spine. It is the same feeling you get when you read a book and get to the moment before something terrible happens. As I felt this strong sense of foreboding, my gaze continued upwards to the momentary calm green plains, before my heart stopped upon seeing newspaper clippings of the brutal killing of Native Americans at Wounded Knee Creek.

The collage is rimmed with newspaper clippings about the massacre and other events of the time. This newspaper framing is a physical manifestation of the social and legislative constraints placed on Native Americans.

The bottom of the collage questions ideas which are generally accepted, such as man’s dominion over nature. Colonial efforts to occupy land in North America did not just perpetuate violence, but also eliminated native cultures and knowledge systems. Some ways it did this include  Christianizing Native Americans, forced abandonment of sacred rituals, or stealing Native Americans’ religious and ritual objects, most of which still have yet to be returned. To this day, these self-righteous acts of war and violence to attain land continue to prevail.

The spiritual ascension of the killed Native Americans is depicted by drawings at the top of the collage, paired with two Western depictions of a Judeo-Christian God. The drawing of Native Americans near the sky depicts the 1890 Ghost Dance. The 1890 Ghost dance was a syncretic Native American prophetic religious practice that united tribes in response to settler colonialism that had dispossessed 46,000 Native Americans. The Ghost Dance provided a spiritual language of resistance and solidarity amid settler violence and widespread assimilation programs. The Ghost Dance was in association with a prophecy by the cleric Wovoka (also known as Jack Wilson) foretelling an end to colonial expansion and the beginning of clean living, an honest life, and cross-cultural cooperation among Native American tribes. The practice of the Ghost Dance movement is believed to have contributed to Lakota resistance to assimilation under the Dawes Act of 1887.

I look at Amiotte’s collage and am reminded that we cannot let the massacres escape our historical narrative. We cannot turn a blind eye to how our settlements were made. How many of us know or have read about this massacre in South Dakota? In wider conversations around environmentalism and land protection, for whom are we protecting these lands? How are we protecting these lands? Before we allow factories and oil pipelines to be built, we must slow down and ask these questions.

Unsettled Ground: Art and Environment from the Smart Collection will be exhibited until June 26 at the Smart Museum of Art. The exhibition radiates life and beauty, while communicating the fractiousness of nature. Through various mediums, the artists collectively delve into the sacredness of land, pushing back against hegemonizing powers. Before you exit, take a moment to view Arthur Amiotte’s “Wounded Knee III” collage assemblage.