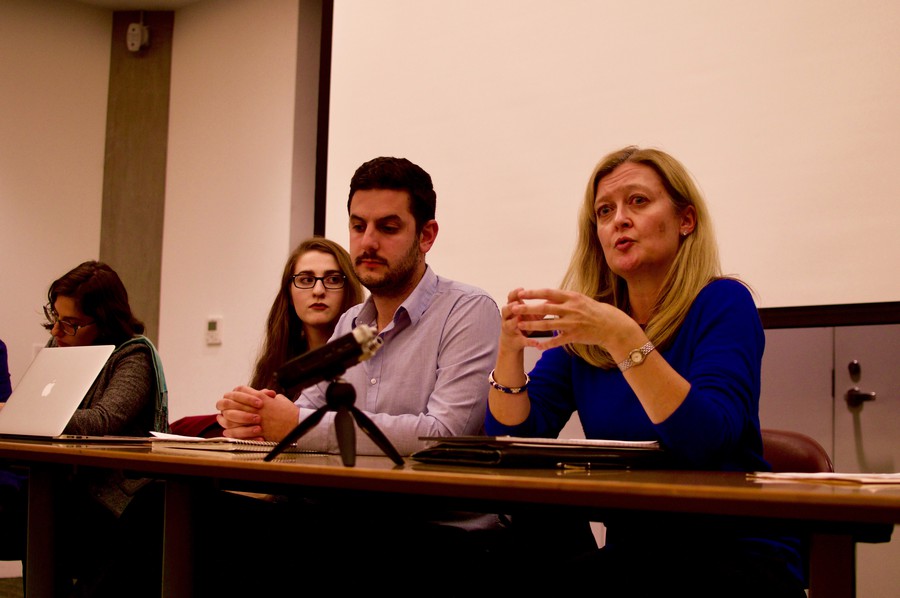 Michele Rasmussen, dean of students in the University, speaks on what the University has discussed with regards to the last three rounds of posters. She stated she would bring comments of tonight’s meeting back to the Provost’s office.

Campus community members gathered Monday to discuss responses and call for University action regarding the recent poster campaign that targeted students and faculty who have spoken in favor of Palestinian rights and the Boycott, Divestment, Sanctions (BDS) movement.

Several of those who spoke said they were concerned about widespread “surveillance” of Palestinian Americans and pro-Palestinian activists.

Dean of Students Michele Rasmussen attended the event to listen to community viewpoints and to explain the University’s responses.

Several days after the posters appeared on campus, the University sent out an e-mail condemning the posters as antithetical to “critical inquiry and debate” and stating that they had been removed. Rasmussen did not indicate any plans for specific further action on the University’s part.

The talk was hosted by Critical Inquiry (CI), an arts and humanities journal based out of UChicago.

The event comes in the wake of a campaign by the David Horowitz Freedom Center to put up posters around campus naming 24 UChicago students and two professors as “supporters of terrorism.”

The people named were either involved with or supportive of pro-Palestinian groups and initiatives on campus, including the BDS resolution passed by College Council last year. The Horowitz Center put up similar posters with different sets of names in October of 2016 and May of this year.

W. J. T. Mitchell, the editor-in-chief of CI and one of two professors whose name appeared on the posters—along with sketches of their faces—helped lead the event. Mitchell works in the departments of English and art history.

The discussion also featured Dima Khalidi, the founder of Palestine Legal, which provides legal support to Palestinian rights activists, as well as Saree Makdisi, a UCLA professor of English and comparative literature who studies issues relating to the Israeli-Palestinian conflict.

The panelists emphasized the connection between the Horowitz Center and canarymission.org, a website that lists profiles of pro-Palestinian activists.

One panelist, Hanna Alshaikh, a recent graduate of UChicago’s Center for Middle Eastern Studies said that after being prominent in activism as an undergraduate, she decided to keep a low profile when she came to UChicago for her master’s.

Despite her break from activism, Canary Mission posted a detailed profile of Alshaikh’s life in 2016, and shortly afterward she was named on the first set of Horowitz Center posters on campus. Alshaikh said that she was fearful of seeking help because it could draw attention to her and prompt a violent response.

According to Alshaikh, “It speaks to the surveillance particularly of Palestinian-Americans in the United States and on college campuses, but also anybody who speaks on Palestinian rights.”

Alex Shams, a third-year Ph.D. student in anthropology whose name was listed on the posters last May, said that the Canary Mission site was created two years ago, around the same time the Horowitz Center began posting at U.S. universities.

“These posters, Canary Mission, [they] are all directly connected, and students on this campus are being punished for their involvement in activism, and we’re not seeing any response except statements that don’t name perpetrators, don’t name the things being done, and don’t even name those affected,” Shams said.

Khalidi and Makdisi both highlighted the effects of being targeted by the Horowitz Center and Canary Mission on the lives and career prospects of students.

Makdisi said that even as a tenured professor, he feels a sense of being under surveillance because Canary Mission members have the time and resources to go through and repost years-old tweets and attempt to twist their meanings.

One audience member, a recent UChicago graduate who had worked with the UChicago branch of Jewish Voice for Peace, said that she lost a job with a Jewish community organization after her information appeared on Canary Mission, despite her attempts to keep her personal information private.

She said that when she learned that she had been added to Canary Mission, “It was terrifying, it was traumatic, it was just horrifying; because even though I had taken such measures to keep my name and my identity withheld from these people who could do this to me, it was all there.”

The alumna said she had contacted the offices of the dean of students and the provost after she was added in the hopes of prompting University response. She said she did not receive any replies.

Khalidi, as a legal specialist, said that it would be difficult for an individual or a university to successfully sue the Horowitz Center for harassment, but that there are other alternatives.

She suggested that schools could send letters to targeted alumni and potential employers explaining that Canary Mission’s profiles have no bearing on the individual and could organize further public forums to discuss the issue and possible solutions.

Responding to concerns about University responses, Rasmussen said that the administration has handled offensive postings, like the flyers put up on campus by a neo-Nazi group this past March, on a case-by-case basis, emphasizing the University’s values of free speech and diverse viewpoints.

She said her concern as dean of students is to make sure the University’s response to the Horowitz posters does not lead more people to the names of the students listed.

“While there might be voices here that say, ‘We want this particular path to be taken,’ I think it would be important to make sure that every individual named on those posters has some opportunity to give feedback on what they want to see done,” Rasmussen said.

In response to a question from Orit Bashkin, the Center for Middle Eastern Studies director, about what she should tell a student who comes for help after being listed on a poster, Rasmussen suggested going to either the Bias Education & Support Team for support or mediation or the UCPD in cases of direct threats or harassment.

When asked whether UChicago is working with other schools on the issue, Rasmussen told Bashkin that she hasn’t found a consensus of possible legal responses among colleagues at other private colleges and universities. She said that there has not been any formal outreach to other schools targeted by the Horowitz Center.

An audience member, also a UChicago professor, who did not give her name said that it’s wrong to respond to events like the poster campaign with abstract language about free speech, since groups like the Horowitz Center claim to be working in defense of American free speech values against “disloyal terrorist sympathizers” who have captured university campuses.

According to the professor, “If we respond to such accusations as a university or a community of scholars by merely saying, ‘We believe in free speech, in academic freedom,’ and we don’t say anything more specific than that, we’re losing that fight, because they’re saying something very specific.”

The correction above also misidentified the opinion "it’s wrong to respond to events like the poster campaign with abstract language about free speech," to professor Orit Bashkin. The opinion was actually expressed by another audience member who is also a UChicago professor.

The original version of this article misattributed the opinion "it to Dean of Students Michelle Rasmussen. It was actually expressed by professor Orit Bashkin.