“This will be President Obama’s life work." 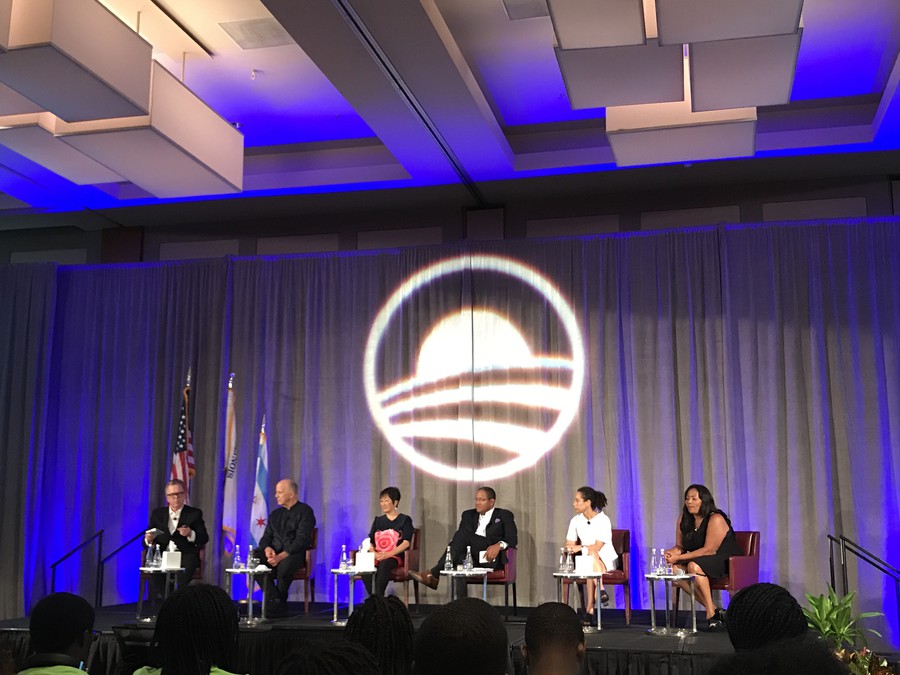 Representatives of the Obama Foundation pitched the planned Obama Presidential Center Thursday night to attendees of a large community forum, many of whom travelled to McCormick Place from neighborhoods near the project’s location in Jackson Park, as a transformative project that would bring many positive changes to the South Side.

“This will be President Obama’s life work,” Strautmanis said. “He believes that this is more important and he will have more impact in this phase in his life than he did as president. He wants to make the Obama Presidential Center the global epicenter for civic engagement.”

President of WVON Radio Melody Spann-Cooper, who co-chairs the Obama Foundation inclusion council and opened the event, said that the center will be the most significant project on the South Side since the construction of the Dan Ryan Expressway.

“It was change. It was controversial. It stirred emotion. But in the end it brought innovation, became and remains one of the busiest expressways in the country, and became the gateway to Chicago’s black middle class. It was transformative,” she said.

While many of the residents who were in the room adore Obama and believe that the Center has the potential to bring positive change to their communities, there is significant concern that a development boom could gentrify neighborhoods, forcing-out longtime residents.

Reginald Jackson, a renter in the South Shore neighborhood, told The Maroon that though he thinks his rent will go up and he knows that property taxes are a significant concern for some, he’s optimistic the project might bring more grocery stores with healthier food to South Shore, and he hopes that the Foundation will pursue initiatives like partnering with health clinics and the University of Chicago Medicine to combat health disparities for African Americans.

"Rent is going to up, but you want to make sure it doesn't force out people who've lived in the neighborhood for years,” he said.

Marsha, an Englewood resident, said she’s excited for the development, and though she understands concerns about rising rents, she has a lot of trust in the Obamas.

Strautmanis stressed the Foundation’s commitment to having the expected 5,000 construction jobs go to South and West Side residents, noting that the Foundation has asked for proposals on diverse hiring practices from the four firms vying for the “privilege”—as he referred to it—to build the center.

A group of about 20 activists, who want the Foundation to sign a written agreement that would legally bind the center to providing benefits for surrounding communities, camped overnight outside the Hyatt Regency McCormick Place hotel, where the event was held at a ballroom inside, to make sure the first question for Foundation officials was about a community benefits agreement (CBA).

Obama made a surprise appearance via video conference for a portion of the event, which gave Woodlawn resident Jeanette Taylor the opportunity to challenge the former president to explain why the Foundation has said it won’t sign a CBA.

Obama spoke for a minute or two about the Foundation’s commitment to the community in general terms, without specifically addressing a possible CBA, when Strautmanis tried to move on to the next question. However, Obama stayed on the subject, and addressed the CBA directly.

“The concern I have with respect to a community benefits agreement in this situation is that it's not inclusive enough because I would then be signing with who?” he asked. “What particular organizations would end up speaking for everybody in that community?”

Obama also stressed that the Foundation is a nonprofit organization, not a business. “The community benefits agreement concept is actually one that I think can be a really useful tool if you have, let’s say, a bunch of developers coming in who are wanting to build a high-rise or wanting to build some sort of for-profit enterprise in your neighborhood,” Obama said. “We’re a nonprofit that [isn't] making money. We are just bringing money to the community.”

The husband-and-wife team of architects showed images of the proposal and spoke about the principles guiding the design. “It certainly is the greatest project we’ll ever work on in our lives so it means everything to us,” Billie Tsien said.

They said the center’s main tower is shaped to model four cupped hands coming together, as pictured in this slide.

Curious about the shape of the largest structure on the library's campus? pic.twitter.com/CJ96dnroRO

“Cornell Drive of course has been a thing in this process, but the removal of that is going to give us an opportunity to do something that we’ve heard from some of you which is that the lagoon currently feels separated from the edges of Jackson Park on the West Side because of the width of the highway, and so the removal of that will give us a chance to make the lagoon feel more visually accessible,” he said.

Asked after the event about the University of Chicago’s involvement in the planning of the Center, Strautmanis only said that the University is a “partner” before directing The Maroon to a representative of Kivvit, a public affairs company, who did not immediately return a request for comment.

In comparison with the George W. Bush presidential library, for example, which is located on the campus of Southern Methodist University and has a strong collaboration with the University, the University of Chicago has said it has largely been hands-off with the Obama library.

Susan Sher, senior adviser to University President Robert J. Zimmer, is on the board of an Obama Foundation–backed nonprofit organization that will facilitate community engagement with the Obama Presidential Center. The Woodlawn, Washington Park and South Shore Community and Economic Development Organization’s purpose is to “ensure that opportunities related to the development of the Obama Presidential Center are leveraged to benefit the residents and local economy in the surrounding community.”

University spokesperson Jeremy Manier confirmed on Thursday that Sher is on the board “in her University role.”