Lightfoot and Preckwinkle Head to Runoff; the Soul Shack to Open | Newsletter for February 27 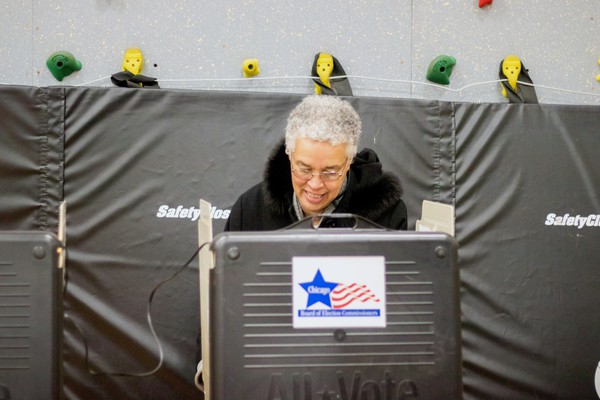 Toni Preckwinkle, who will face Lori Lightfoot in a runoff, cast her vote near campus on Tuesday morning.

The hotly contested 20th Ward aldermanic race will head to a runoff between community organizer Jeanette Taylor and educator Nicole Johnson, who received 29 percent and 22 percent of the vote respectively.

The Fifth Ward’s Leslie Hairston, five-term incumbent, will face activist Will Calloway in a runoff. Hairston earned 49 percent of Tuesday’s vote, with Calloway at 27 percent, out of 97 percent of precincts.

In the Fourth Ward, incumbent Alderman Sophia King was reelected to her seat, earning 66 percent of votes to challenger Ebony Lucas’s 34 percent, with 95 percent of precincts reporting.

The Soul Shack is taking shape: Hyde Park’s newest spot for Southern soul food is expected to open in the coming weeks.

Darren Reisberg, University Vice President for Strategic Initiatives, was nominated by Governor J.B. Pritzker to be the next Chairman of the Illinois State Board of Education.

Student Government passed a bill on Monday allowing students to request SG records and also approved the creation of a committee focusing on accessibility for students with disabilities.

Columnist Ruby Rorty reflects on how the University’s wealth impacts its decisions.

Columnist Natalie Denby finds that statistics about post-graduate outcomes are unjustifiably hard to come by.

Columnist Soham Mall reflects on the challenge of choosing a major in the face of different, biased opinions.

Women’s lacrosse had a spectacular start to the season.

Track and field saw outstanding performances at the UAA Championships.

Women’s and men’s basketball were both defeated by Wash U.