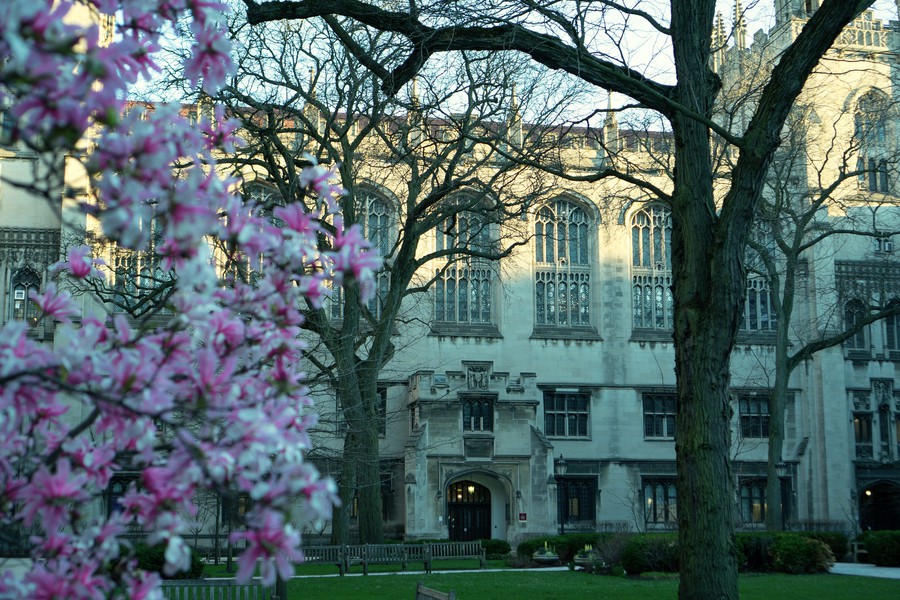 The office of the Dean of the College, housed in Harper Memorial Library, manages the Quantrell award.

Faculty Forward, the union consisting of non-tenure-track faculty members, filed a formal grievance with the University in early April, claiming that the University has violated their contract by denying union members eligibility for the prominent Quantrell teaching award.

The Quantrell, one of the country’s oldest undergraduate teaching awards, is a student-nominated prize granted to three to six faculty members each year. The award has often gone to faculty nationally renowned in their fields, including philosophy professor Agnes Callard and sociology professor Andrew Abbott.

Before the union’s contract was ratified, most non-tenure-track faculty members were not eligible for the award. After the union repeatedly asked for eligibility in the face of University pushback, the two parties agreed on a finalized contract, which reads, “Nothing in this Agreement precludes a [non-tenure-track] Lecturer from being nominated for and receiving any teaching awards for which they are eligible, including the Llewellyn John and Harriet Manchester Quantrell Award, as those awards exist from time to time.”

Despite the contract, the University’s online description of the award currently lists the only eligible faculty members as “long-term, full-time UChicago faculty members who are tenured, on the tenure-track, or serve as Senior Lecturers.”

University spokesperson Jeremy Manier confirmed that non-tenure-track faculty members continue to be ineligible, saying in a statement, “The 2018 contract with lecturers did not change eligibility standards for this or any other award.” Asked about the language in the contract, Manier did not address the apparent discrepancy.

Manier noted that there is a Mueller teaching award for which only non-tenure-track lecturers and senior lecturers who teach humanities courses are eligible.

For union members, the University’s continuing to bar non-tenure-track faculty members from being eligible for the Quantrell Award represents a big blow. According to union estimates, non-tenure-track faculty teach 40 percent of undergraduate courses. As such, they believe the University should consider them on equal footing with tenured faculty members in the area of undergraduate teaching.

“We do do different jobs than tenure-track faculty and tenured faculty, but the one thing that we do in common is that we teach,” Faculty Forward member and humanities lecturer Geoffrey Rees said. “If we really value teaching and all care about teaching, then the one thing that we all do in common should all be acknowledged in common on a level playing field, and that’s fundamentally what the issue is about for us.”

The union first became aware of its members’ continued ineligibility when one of Rees’s students tried nominating him for the award in March and was notified that Rees was not eglibile. Rees said he then asked the union representative to tell the University that it has made a mistake, and the University’s labor lawyer replied that Rees is not actually eligible for the award.

“I was surprised to find out that what I thought had been a settled issue...was not settled from their side and in fact it was actively disputed,” Rees said.

The student, first-year Andrew Bacotti, felt frustrated with the outcome, telling The Maroon, “In the nature of the school’s freedom of academic thought, this award should award the best teacher, not the best full-time [tenure-track] professor.”

The University has long contested the inclusion of non-tenure-track faculty members in Quantrell eligibility, according to Jason Grunebaum, a member of Faculty Forward’s bargaining committee and a lecturer in the South Asian languages and civilizations department.

Grunebaum said that in the beginning of bargaining when the union brought up adding Quantrell eligibility, one administrator questioned the move, noting that the Quantrell is a “very prestigious" award.

Grunebaum added that in past versions of the contract, the University had attempted to entirely cross out the section that mentions teaching awards or cross out the specific mention of the Quantrell Award. In the version closest to the final contract, University representatives qualified language that union members are definitively eligible for the award, he said.

Tracked changes of the version closest to the final contract. The University wrote “may be.” The union crossed it out and wrote “are” and also added in “and receiving any.” The final version of the contract includes the changes the union made.

In his statement, Manier said, “The award’s original intent, which carries on to this day, was to encourage faculty members to excel in teaching as well as research.” Non-tenure-track lecturers are not expected to conduct independent research on top of their teaching obligations.

The mention of research in Manier's statement does not appear in online descriptions of the award. One University webpage quotes Ernest Quantrell when he was asked decades ago to describe the motivation behind his donation to establish the award, named after his parents: “The success of a university depends on its product, and its product consists of students trained to lead happy, proficient, useful and unselfish lives. To obtain this product, a good faculty is essential and constitutes the most important part of a university. We have had, and still have, great teachers, but we will have still greater ones.”

Rees noted that job titles and teaching responsibilities in academia have shifted since the award was established in 1938, indicating, in his view, that “the present exclusive criteria for eligibility are contingent and as such open to revision.”

“We think that basing eligibility for this award on a hierarchy of job titles, and not on the actual work of teaching, misses both the spirit of the award and the history of teaching in the college,” Rees said.

The union of non–tenure-track faculty members believe that their contract grants them eligibility for the teaching award.