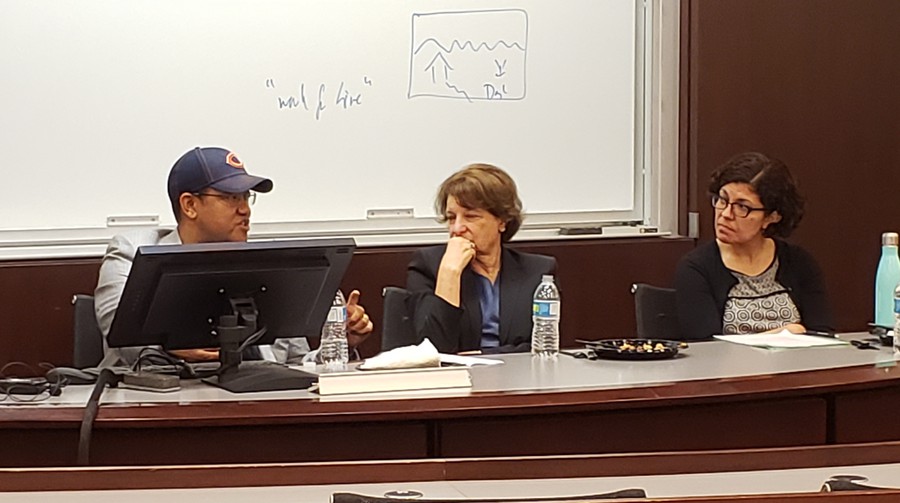 A panel at the Law School discussed the Obama Foundation's goals and visions for the Obama Presidential Center, as well as the University's connection to the project.

UChicago Law School student organization Law of the Land hosted a panel with University and Obama Foundation representatives to discuss the relationship of the Barack Obama Presidential Center (OPC) with the Chicago community. The forum served as a follow-up to a Law of the Land–organized debate between law professors over the OPC and public trust doctrine in April.

Michael Strautmanis, the vice president of civic engagement for the Obama Foundation, began by describing Barack and Michelle Obama’s ambitious goal of establishing a presidential center that combines the traditionally separated presidential library and the foundation headquarters into a unified entity. “They really decided to create an idea that would really synthesize those goals, which is one organization and one institution,” Strautmanis said.

The Obama Center is departing from historical precedent in that it will contain few physical records; the vast majority will be digitized instead and stored elsewhere.

According to Strautmanis, by combining the library and the Foundation’s headquarters into one complex, the Obamas believe that the OPC will both tell the Obamas’ story through the museum and “get people involved in the mission of the Obama Foundation—to engage the next generation of leaders.”

According to Strautmanis, the Obamas’ underlying mission behind the OPC is to give back to the community. As Chicagoans, the Obamas have seen the unequal distribution of amenities across the city of Chicago firsthand and believe that locating the OPC on the South Side would help begin to relieve such inequality, Strautmanis said.

Susan Sher, senior advisor to the president of the University of Chicago, spoke about the University’s role in the OPC. She said that, before the project’s official plans had been announced, “[i]t was unclear exactly what the Obama Presidential Center would guarantee in its relationship with the community. But the view was it could be another anchor on the South Side; it could be transformative in terms of incentivizing economic development.”

As the OPC plans have solidified, the University has established roles within the Office of Civic Engagement (OCE) responsible for researching how the University can better support community organizations and leadership. Susana Vasquez, associate vice president of the OCE, said her office has organized meetings with community partners and CBA advocates “to help think through how we can strengthen our current commitments… and build new partnerships.” These meetings will conclude in June and result in a set of recommendations to President Robert Zimmer.

Since the announcement of the OPC in 2015, many have called for the Obama Foundation to sign a Community Benefits Agreement (CBA), but both the Obama Foundation and Obama himself have declined to sign such an agreement. Strautmanis explained the Obama Foundation’s rationale for this decision, saying that while the Foundation explored the possibility of a CBA, when the time came to sign a document, too many in the organization felt they were being excluded from the deal.

Instead of signing a binding CBA document, the Obama Foundation decided to take an alternate approach that they felt would be more inclusive. “What we decided to do was essentially take the essence of what we were being asked for… and put out a robust set of commitments that we knew we wanted to be held publicly accountable for,” Strautmanis said.

The list of commitmentsmade by the Obama Foundation are phrased as promises, but unlike commitments made in a CBA, there are no legal ramifications if those commitments are not met.

As the Obama Foundation and the University of Chicago strengthen their ties during the construction of the OPC, Vasquez says that the two share enormous responsibilities to the South Side community. She sees two major facets to these responsibilities: “[O]ne is [to] absolutely be mindful of the leadership that has been in these neighborhoods for decades and has rightfully hold the neighborhood together,” and the second is to recognize “civic engagement from a younger generation of civic leaders.”

When asked by The Maroonafter the talk whether the Obama Foundation has any plans to address the Protect Our Parks lawsuitfiled against the Chicago Park District and the City of Chicago, Strautmanis answered that the Foundation stands by the current OPC plans.