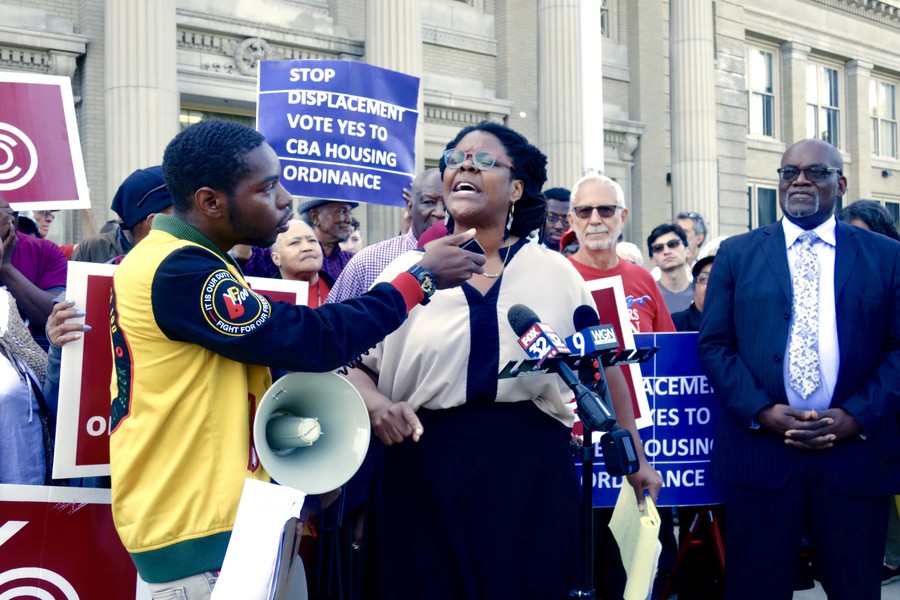 Eboneé Green, an activist with Black Youth 100 Project, gives opening remarks at a CBA Coalition rally on the day a UIC study commissioned by the Coalition was released.

As the proposed construction start date for the Obama Presidential Center (OPC) nears, a study from the University of Illinois at Chicago (UIC) released in early September finds that increases in local housing prices may only continue to cause displacement unless new guarantees for affordable housing are made.

Commissioned by the Community Benefits Agreement (CBA) Coalition, the study shows an attempt by the Coalition to amplify efforts to obtain city approval of a CBA. In July, the CBA activists worked with local aldermen to introduce a CBA ordinance, which is currently being considered by City Council’s housing committee. On the day the study was released, the activists staged a rally demanding City Council pass the ordinance faster.

The study, by the Voorhees Center for Neighborhood and Community Improvement at UIC, surveyed home prices in the OPC area. It finds that housing costs have increased at a higher rate locally than citywide since 2016. In the OPC area, it finds, 60 percent of renters spend more than 30 percent of their income on rent—which the U.S. Department of Housing and Urban Development (HUD) defines as unable to afford their monthly rent. 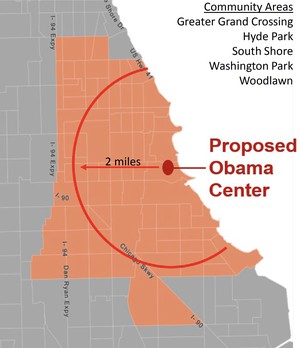 Map of the region analyzed within the Voorhees Center Study

“There is good reason to believe that future development will continue this trend, especially on lots closest to the Obama Center,” the study says.

The study finds that 70 percent of renters in the area are classified as very low-income by HUD standards, and brings attention to rising eviction rates in the area, showing a need not only for the creation but also protection of affordable housing.

“Eviction rates are some of the highest in the city with South Shore being the highest, averaging 1,800 a year, which is about 9% of renters,” the study says.

The study also puts forth the possibility that housing in the area may be lost if rental assistance contracts are not renewed. If housing prices continue to increase and the value of housing vouchers remains the same, it notes, families may pay more than they can afford even while receiving housing vouchers.

In light of the findings, the study recommends new affordable housing options in the area.

On the day the study was released, the CBA Coalition hosted a protest beginning at Hyde Park Academy High School demanding accelerated and immediate action towards signing a CBA.

Ebonee Green, an activist with Black Youth Project 100, began the protest saying, “We commissioned a study that came out that has been well established. It is validated data, reliable data. We are not making things up. We are not ragtags. We are absolutely serious and we are not going anywhere.” 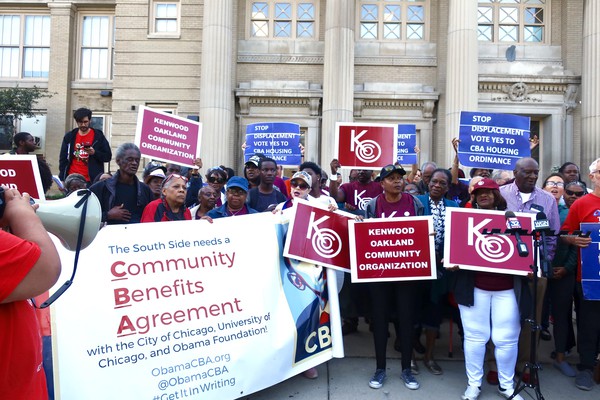 The University of Chicago, another large developer in Woodlawn who has ongoing development projects including a megadorm and student wellness center on the Midway, said it is working with both elected officials and community organizers to examine affordable housing.

Manier said the University has met with organizations, including representatives from the CBA Coalition, with the intention of working “in deeper partnership with community leaders to generate more equitable development and economic inclusion on the South Side, including in the area of affordable housing.”

By Matthew Lee and Elaine Chen

Some community stakeholders, such as the University, are concerned the ordinance in its current state might disincentivize investment.