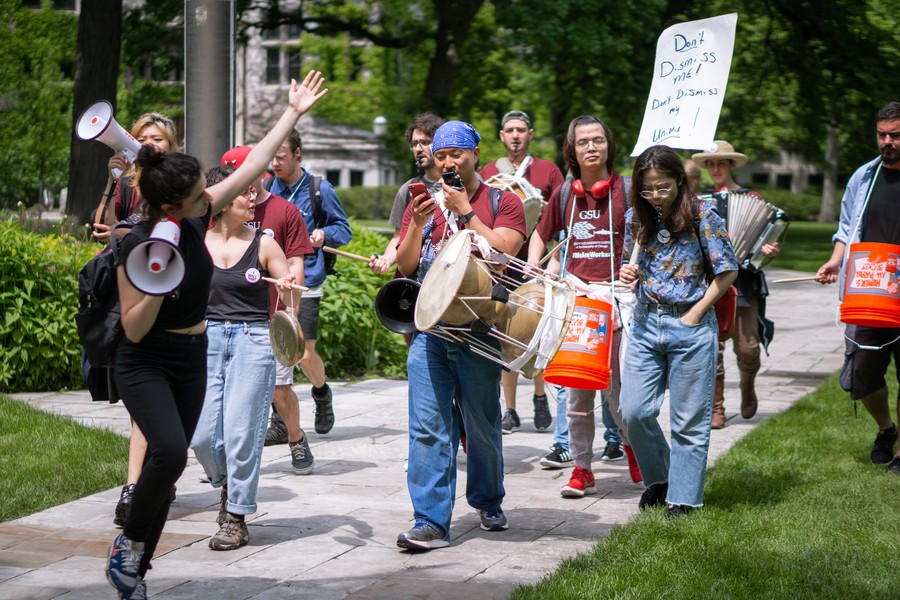 GSU's roving picket line spent the second day of the rally marching around campus with their instruments.

The National Labor Relations Board (NLRB) issued a proposed rule on Monday that would define undergraduate and graduate workers at private colleges and universities as nonemployees under the jurisdiction of the National Labor Relations Act (NLRA). If the rule becomes permanent, student workers—including the instructors and research assistants in UChicago’s Graduate Students United (GSU)—will not be subject to federal labor protections, including the right to form a federally-backed union.

In the proposed rule, the Board argues that “students who perform services—including teaching and/or research—for compensation at a private college or university in connection with their studies are not ‘employees’ under the NLRA.”

In a statement to The Maroon, GSU called the proposed rule “a shameless attempt to undercut the rights of student employees.”

The Board’s arguments echo the language used by UChicago in its opposition to GSU.

In the proposed rule, the Board majority argues against asserting its jurisdiction over “primarily educational” relationships in order to protect “free speech rights in the classroom and several matters traditionally in the domain of academic decision-making, including those concerning course content and length; class size and location; who, what, and where to teach or research; university student assistants' educational and service responsibilities; and standards for advancement and graduation.”

Administrators at UChicago have similarly argued that a union could interfere with graduate programs by inserting union representatives in decisions that have traditionally been made by faculty.

“A collective bargaining agreement would likely create an environment of standardization without room for differentiation, changing the nature and scope of the relationships of graduate students to their advisors, other faculty, and degree programs,” Provost Daniel Diermeier wrote in an e-mail to the university community in June 2019, after the end of GSU’s three-day strike.

The proposed rule is the latest move made by the Trump-appointed majority on the Board—which has historically used individual adjudications to lay out labor policy—to codify new policies through the formal rulemaking process. Given the monthslong public comment process required by rulemaking, changing course from this decision would be difficult for a future majority. In the past, the NLRB has decided whether student workers at private universities fall under the purview of NLRA in individual adjudications, which can be overturned by subsequent cases.

A Democratic majority on the Board overturned long-standing precedent and granted student workers at private universities federal labor protections in 2000—a decision which was overturned by a Republican majority in 2004. An Obama-appointed majority reversed that ruling in a 2016 adjudication known as Columbia, which extended private university student workers sweeping protections, including a route to form unions through an NLRB-sanctioned vote. If the proposed rule becomes permanent, it would reverse the precedent handed down in Columbia.

GSU withdrew its unionization petition from the NLRB in 2018, fearing that the Board could use its case to overturn Columbia. Since then, GSU has held demonstrations—including a walkout in October 2018, and a high-profile strike in June—in an effort to force the University to enter voluntary negotiations with the union. While the proposed rule would mean the NLRB could not force universities to recognize unions, UChicago could still opt to voluntarily recognize GSU—as administrations at schools like Harvard have done.

“We organized and won real improvement before the 2016 Columbia ruling, we kept organizing once it became clear that Trump's majority wouldn't enforce that ruling, and we'll keep organizing now,” GSU told The Maroon. “Trump's political maneuvers don't prevent UChicago from following the lead of Harvard, Brown, and Georgetown, and bargaining with grad workers for the good of the university.”

The Board’s three Republicans supported the proposed rule, while its sole Democratic member, Lauren McFerran, dissented. McFerran cited several Chicago-area graduate student unions in her dissent, writing that “at University of Chicago and Loyola University Chicago, students have had pro-union votes but universities have declined to recognize them, leading to demonstrations, sit-ins, and even arrests.”

McFerran voiced her opposition on Twitter, saying, “as the Board has correctly found, student employees are workers, with workers’ interests and workers’ rights. There is no good basis - in law, in policy, or in fact - to take their rights away.”

The public will have 60 days to submit comments on the proposed rule, which will be reviewed by the Board before it issues a final rule. Comments can be submitted online or by mail to the Board’s offices in Washington, D.C.

Grad Unions from Across Chicago Rally against NLRB, Vow to Continue Organizing