Don’t Get Your Hopes Up About Zimmer’s Replacement

The president ultimately reports to the trustees, and they have given no signs of wanting a new direction for Zimmer’s successor. 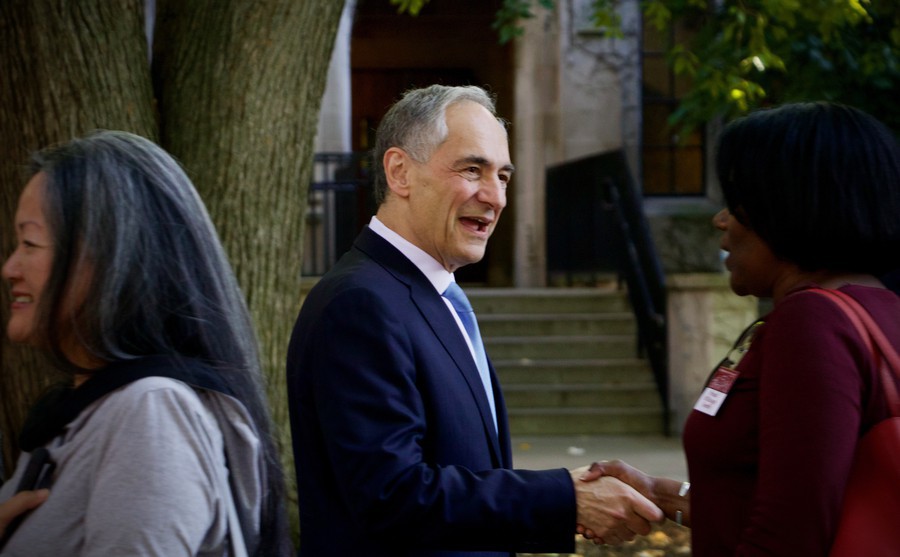 It’s no secret that The Maroon’s editorial board has taken issue with decisions made by Zimmer and other administrators who report to him. From the COVID reopening plan and mental health resources to Graduate StudentsUnited (GSU) and policing, we have been vocal critics of the Zimmer administration. And it isn’t just us: faculty, staff, and students have offered similar critiques in the pages of The Maroon for years.

We must be cognizant of the context in which the search committee makes its decision. The University is facing the COVID–19 pandemic as well as a national reckoning over police violence and racial justice. Given these circumstances, there is certainly room for a bold new president to lead our institution into the future. The willingness from the University community to help that president shape UChicago’s future is there. Since the beginning of the pandemic, we’ve seen myriad organizing efforts from faculty members and students alike: consider the faculty campaign#MorethanDiversity, the newly formed BLAC which is meant to improve treatment of Black student-athletes, and the academic departments’ adjustments in response to the events of the spring and summer.

The moment we are living through is difficult, but there is obvious enthusiasm among University members to meet the challenges we face. With this knowledge in mind, the trustees choosing the President should be committed to listening to and meeting with students who represent the interests of the full campus community—not just major donors.

When confronted with the possibility of a new University president, we might be tempted to think that decision-making in these areas might change for the better. But we write in order to bring attention to the fact that, without a major change in the search committee, the new President, whoever they may be, will demonstrate what is essentially a continuation of Zimmer’s administration, his ideas, and his actions. Though we can expect to be deluged with good press about whomever the committee selects, we cannot let an impressive pedigree or flattering write-ups transform a regressive choice into a progressive one. While it is possible that the new President will recognize GSU or disband the UCPD (who are we to predict the future?), it seems unlikely, especially given the composition of the trustees selected to run the search process. Instead, the University should extend decision-making power beyond this small group, such that serious weight is placed on the input of faculty, staff, students, and Hyde Park residents.

The trustee search committee fails to reflect the institution it administers in a number of ways. In the summer’s many emails responding to widespread protests around racial equity, Provost Lee noted that “diversity and inclusion are core values of our institution.” If UChicago believes that fostering diverse spaces is an important step towards that equity, why is the presidential committee uniformly wealthy and overwhelmingly white males? Since its founding, the University’s thirteen presidents have all been white, and all but one have been men. To be genuine, the University of Chicago’s proclaimed institutional commitment to diversity and inclusion cannot stop at new hires and programs. Instead, these supposed values must extend to the University’s highest office, because institutional problems demand institutional change. The members of the search committee share another outstanding commonality in their professional and financial profiles. Excluding Zimmer, all but one of the trustees on the committee are current or former finance executives. A quarter of the individuals on the search committee have personal net worths of over $1 billion. Two thirds have degrees from Booth and the Law School, while the rest of the University of Chicago—including four other professional schools, four graduate divisions, and the school of continuing studies—are nowhere to be found. Are we one of the world’s great intellectual destinations, or merely a finishing school for the Davos crowd?

Even beyond the committee’s uniformity, the ties its members have to Zimmer and his legacy should concern those hoping for a change of course. Several members of the trustee committee were on the search committee that selected Zimmer nearly 15 years ago. Zimmer himself is also a member of the committee that will pick his replacement, and—unless he has serious regrets about his time as president—is unlikely to select someone who would undermine his legacy by changing the University’s course.

Neubauer’s message announced the creation of a faculty advisory committee, which we hope will have a serious role in selecting the new president. However, if the devaluation of faculty input in high level decision-making in recent years is any precedent, the faculty advisors may have limited input in the final decision. Neubauer also emailed students on October 16 requesting their input on the Presidential search. As with the faculty advisory committee, we do not have confidence in students’ influence given the lack of transparency regarding how that feedback will play into the selection of the new president. Per the University’s bylaws, the President is elected “by affirmative vote of a majority of the trustees to serve at the pleasure of the Board.”

Instead, remember that the President ultimately reports to the trustees, and the trustees have given no indication that they want the University to be any more responsive to community members than it has been under Zimmer’s leadership. There’s still time for a change, and we encourage the trustees to include faculty, staff, students, and community members in the selection of the University’s next president, rather than placing the decisions in the hands of a circle of ultra-wealthy alumni. We urge the search committee to remember the mission statement of the institution they serve and to elect a President who will dedicate themselves to the growth of knowledge, not just endowment returns, because we deserve a University that enriches human life, not the prestige of a privileged few.