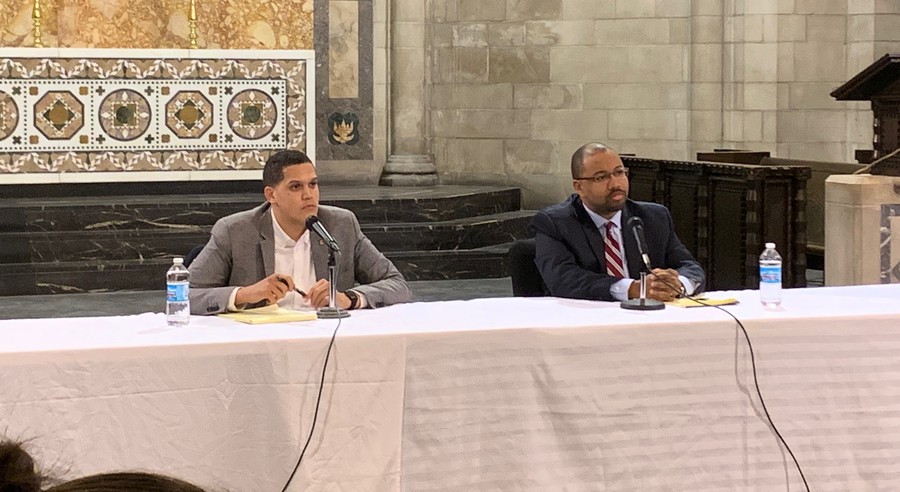 At an Illinois State Senate 13th District Democratic Primary candidate forum on Monday, incumbent Robert Peters and challenger Ken Thomas highlighted differences in their campaigns and discussed issues ranging from the case of Charles Thomas, a former student shot by a University of Chicago Police Department (UCPD) officer, to the state pension crisis.

The forum, hosted by the South Side branch of Indivisible Chicago at the First Unitarian Church on 57th and Woodlawn, allowed audience members to directly ask questions to the candidates.

The first question came from Wendell Thomas, Charles Thomas’s father. Thomas asked Peters about his proposed bill that would mandate a social worker to be present when government entities respond to mental health emergencies in the state of Illinois. The bill is currently in the hands of the Illinois State Senate Public Health Committee.

Peters explained that he is working with Access Living, an advocacy group for individuals with disabilities, to improve the bill. Peters gave his reasoning behind the bill: “To me, it’s the idea of being able to call someone for wellness, and they should be able to be a professional who understands what you’re going through and talk to you about it.”

Ken Thomas said that if elected, he will push for legislation to increase the transparency of UCPD.

Thomas drew from his experiences as a lawyer representing low-income tenants in eviction court and working directly with state laws in a real-life setting.

“I’m a lawyer…. I’ve navigated some of these laws that I want to make changes to,” Thomas said.

“It’s absolutely ridiculous that we have a police force that is allowed to operate in private and doesn’t have those same disclosure requirements mandated by law, as do other public police forces,” Thomas said.

During the forum, both candidates proclaimed their support for passing the Clean Energy Jobs Act, lifting the state ban on rent control, and vowing to work on solutions to the state’s pension crisis.

In his opening statement and throughout the forum, Thomas condemned Peters for taking large money campaign donations from corporations and political action committees. “I have taken no money from corporations,” Thomas said. “We have taken no money from special interests or campaign lobbyists of any kind, and I can’t say the same about my opponent.”

One audience member asked how Thomas and Peters would get big money out of municipal and state elections.

Thomas advocated for putting smaller caps on campaign donations and other legislation, to remove what he sees as corporations having too much influence in politics. He also promoted for publicly funded campaigns.

“We ought to move towards publicly funded campaigns,” Thomas said. “We have seen it work in other states, and it’s something that can definitely work here.”

In response to the question and to Thomas’s criticism, Peters said that he is proud to get support from labor groups. He is also in favor of moving toward publicly funded campaigns in Illinois, and said that the six-to-one match system of public funding would work best. In this system, the government would match six times the amount of small dollar donations to candidates.

Both looked to their respective political experiences when asked to differentiate themselves from their opponent.

Peters explained his 10-year history as an organizer, saying that even if he is not reelected, he will continue his organizing.

“I am not here to be the savior candidate. I am here to be the organizer who says, ‘Let’s get good things done in Springfield,’” Peters said to the audience.

The two candidates discussed similar issues at a previous forum hosted by the League of Women Voters of Chicago and are scheduled to meet again at a forum hosted by People United for Action on Saturday.