Oh, My Dear Clone Wars. How I’ve Missed You! 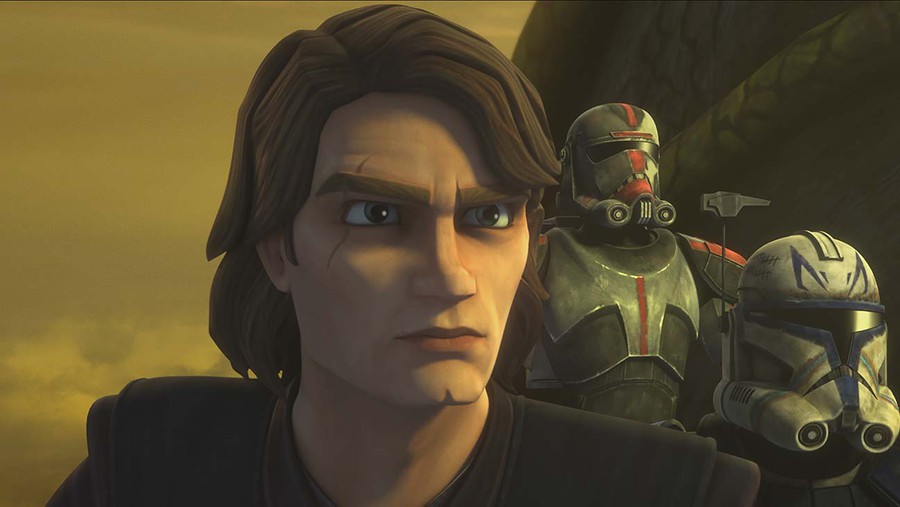 The story arcs before the Siege of Mandalore might have been meant to be expendable, but not to me...partially.

The following review contains mild spoilers for “The Bad Batch” and “Ahsoka’s Journey” arcs. Chances are you don’t care anyway, considering everybody only wanted to see the Siege of Mandalore.

I was indoctrinated into the Star Wars fandom by my father, who sat my three-year-old self down on our couch to watch Luke blow up the first Death Star in A New Hope. Since then, I’m proud to say that the galaxy far, far away has consumed my life. From memorizing every line in the Mustafar dialogue to drinking blue milk at Galaxy’s Edge, Star Wars is an exhilarating adventure that encapsulates my lifestyle.

Of course, like any franchise, Star Wars has its imperfections: Jar-Jar Binks (ugh), the entire sequel trilogy, and Solo. Yet, despite recent disappointments and an overwhelmingly polarized fandom, Star Wars always manages to pull me back into my obsession, reminding me why I loved it in the first place: a story of loss, hope, and persistence (also, Obi-Wan Kenobi). And this spring, Clone Wars delivered that message—just in time to alleviate any fan’s boredom in quarantine. The beginning of the end of the 40-year-long Skywalker saga is at once fulfilling and agonizing, especially with my hindsight on Order 66’s impending execution.

That said, I will focus on the first two arcs that build up to the Siege of Mandalore and Order 66—“The Bad Batch” and “Ahsoka’s Journey”—for I believe these two arcs haven’t received as much attention as the (deservingly) hyped Siege of Mandalore. These other two story arcs might have seemed expendable, but not to me...for the most part.

“The Bad Batch,” the start of the show finale, hit the ground running. We are reintroduced to the Clone Wars world with an instant familiarity through Captain Rex (Dee Bradley Baker) and an older Anakin Skywalker (Matt Lanter)—whose haircut now resembles his Revenge of the Sith style—as they search for a lost and presumed-dead clone, Echo, on the planet Skako Minor. Here, I was immediately impressed by how true to the prequel trilogy and original Clone Wars that producer Dave Filoni stayed. While J.J. Abrams slathered a reckless, sweeping revisionism into The Rise of Skywalker (2019) after fans complained about The Last Jedi (Rian Johnson, 2017) and drilled endless plot holes into an already disastrous web of unexplained directorial decisions, Filoni embraces all the predecessors to the final Clone Wars season without completely undoing canon. He nods to the fallen trooper Fives, whose malfunctioning microchip partially revealed the secret behind Order 66; he honors the name of 99, a disfigured clone who sacrificed himself to save Kamino from Separatists, via Clone Force 99 (nicknamed the Bad Batch); all the while inserting new characters whose roles are fresh, distinct, and vital to the narrative.

The Bad Batch, a group of clone troopers with genetic mutations that make them an elite combat force, was a fascinating and instantly likeable addition to Clone Wars, with each member given its own personality and physical features. Unlike the disciplined regular troopers, they are bold risk-takers—a surprise to the reserved Rex. Their group dynamic was impeccable throughout the entire arc, each contributing equally to Echo’s rescue mission, rather than just allowing Anakin and Rex to take the spotlight all the way through. The two standouts were Tech, a scrawnier clone whose obsession with “recording everything” summons the flying Keeradaks in a daring escape from the sinister Techno Union labs, and Wrecker, the typical “Big Guy” who loves explosions and destruction, yet shrinks at the thought of high elevation.

Two scenes in particular stood out to me in this arc: Echo’s persistence at the Anaxes Assembly Complex, and Anakin’s encounter with Separatist Admiral Trench. Mutilated from experiments, Echo’s mind contains algorithms that the Separatists use to send commands to their droid armies. Having broken free from Techno Union, whose work supports the Separatists, Echo is determined to prove his allegiance to the Republic by hacking into Trench’s communications system. Although he assures his fellow clones that his plan will be a victory for the Republic, the Bad Batch casts their doubts, constantly questioning aloud where Echo’s true loyalty lies. Of course, Echo remains steadfast to serving the Republic and disables all of Trench’s droids, proving himself to be—despite his time as a Separatist weapon—a true soldier for the Republic cause. In hindsight, it is an ironic contrast to what is foreshadowed to come: the infamous Order 66, in which the clones unthinkingly betray the Republic and help Darth Sidious establish the totalitarian Empire. With Echo’s allegiance clear even after his torture, there is hardly any doubt within the Jedi that the troopers are trustworthy brothers, making the audience’s knowledge of the clones’ eventual turn against the Jedi that much harder to swallow. It is uncertain whether the Bad Batch participated in Order 66, but even so, the very imagined scenario in which this wild and free bunch is manipulated into becoming mindless slaves to the Empire is a cruel and upsetting fate. Thanks for the punches to the gut, Filoni. Give me more.

As for Anakin, we see hints of his calling to the Dark Side creeping closer and closer. When he approaches Admiral Trench and threatens to kill him, his face twists with fury and frustration. When Trench calls his bluff, stating that Jedi are peaceful, Anakin does not hesitate to hack off Trench’s limbs, declaring, “I don’t have such weaknesses!” Perhaps it was an unintentional slip on Anakin’s part, but Filoni makes it obvious: Anakin abandons the peaceful methods of the Jedi when he sees fit, subconsciously viewing their religious code as a crippling obstacle to true victory and liberation. In fact, maybe it is not Anakin who seals the Republic victory at Anaxes, but the Sith Lord Vader. It was a chilling ambiguity and a compelling lead-up into his complete switch to the Dark Side of the Force.

On the other hand, “Ahsoka’s Journey” was a blatant, half-assed filler arc dripping with a boring narrative and uncharacteristic, often stupid, interactions. I don’t care that people will defend it as a pivotal moment—it was nonsensical garbage that reminded me of The Rise of Skywalker–esque writing. I tried to find positives, but the only one that came to mind is the fact that the Star Wars community is collectively trying to forget it ever happened. This arc, clearly an intermission so that Clone Wars could perfectly end on our sacred May 4, follows ex-Jedi Ahsoka Tano (Ashley Eckstein) through the lower levels of Coruscant, the Underworld. She meets the Martez sisters, Trace (Brigitte Kali) and Rafa (Elizabeth Rodriguez), who are skeptical of the Jedi because they seem to bring destruction wherever they go. Ahsoka is surprised to realize that she embodies what the Martez sisters wished the Jedi were: humble, selfless, and not jumbled up in politics.

Extremely forgetful spice run and Pykes conflict aside, I suppose that’s the determining message of this arc: Ahsoka’s realization that the Jedi are political pawns. Hell, she even spits it at “oh-no-I’m-not-brave-enough-for-politics” Obi-Wan’s face later on because she resents what the Jedi have become. However, it's a redundant addition to what Ahsoka—and the audience—already knew. Ahsoka had already realized the corruption within the Order when it had falsely accused her of a crime one season ago. She had grown so disillusioned with the Jedi that we had to suffer watching her quit: there was no need to bash it further into our heads through two side-character, empty-headed sisters. Alternatively, as a friend recommended, Ahsoka could have ventured into the Coruscant underworld and encountered a bounty hunter—a popular trope following the ever-popular Mandalorian TV show. While diving into the moral greys of bounty hunters, perhaps Ahsoka could have discovered her own moral ambiguity, which blossoms in Rebels. Or they could have scrapped this arc altogether and replaced it with this: an unfinished duel between Boba Fett and Cad Bane, which explains how Boba got the dent in his helmet. That said, we can’t go back and erase this horrible failure of a spice-run arc. I will just continue to brainwash myself into believing it never existed.

Other than the Martez sisters arc, I loved the beginning of this final season. It reunites the veteran audience with beloved characters but also forces us to watch the chaos unravel, sadistically playing with the concrete fact that we all anticipate the tragic fall of the Republic that’s going to come to light in the next few episodes. I don’t think any of us were ready to see the harrowing Order 66 as it comes to our dear Ahsoka Tano and Captain Rex, anyway.

Watch this space for the coverage of the much-anticipated Siege of Mandalore arc, to be published on the Chicago Maroon.

Disney has depleted the Star Wars saga of compelling storytelling for the sake of money-making nostalgia, and Episode IX is no exception.