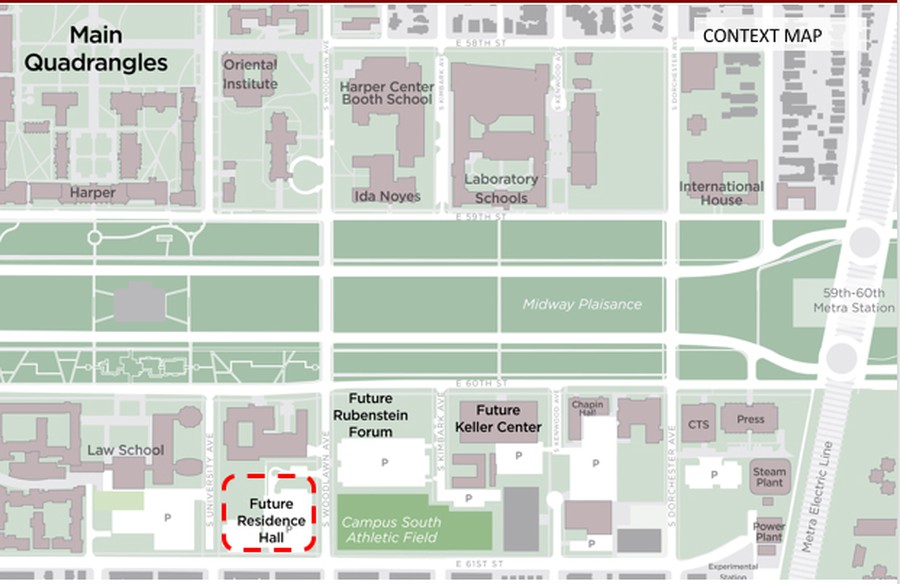 The location of the newly announced Woodlawn Residential Commons.

By Anant Matai   and Camille Kirsch

Plans to build a new 1,200-person dorm south of the Midway were announced Tuesday in a statement from Dean of the College John W. Boyer.

The new dorm, called the Woodlawn Residential Commons, will be located just north of 61st Street between University and Woodlawn Avenues. The Maroon had previously reported on plans to build a dorm at the site, which is the current location of the 1155/Harris parking lot.

The northern end of the block is the current home of the Harris School’s main building, which will be vacated when the Harris School moves into the Keller Center, formerly known as New Graduate Residence Hall.

The dorm will accommodate students in 11 three-floor houses, according to the announcement, and will feature a new dining commons. With over a thousand residents, it will be the university’s largest dorm to date.

Construction will begin in the summer of 2018 and is meant to be completed in advance of the 2020–21 academic year. According to a University press release, Elkus Manfredi Architects will be designing the new facility. The firm has been responsible for several projects at colleges and universities, including a graduate student residence hall at Harvard.

A partnership between Harrison Real Estate Capital and Capstone Development Partners will oversee the financing, design, construction, and upkeep of the new dorm, the press release also said. The two firms have worked together on other dorm projects, including one at Seattle University and Cornish College for the Arts. The arrangement, the University said, will “allow the University to develop the commons without taking on new capital investment.” Once students move in, according the University’s release, “the facility will be managed like all other residential and dining halls on campus.”

The new dorm is being built just north of 61st Street, historically the line that defined the southernmost extent of University development. The University listed several provisions for neighborhood residents in its announcement of the project, including provisions guaranteeing business for women- and minority-owned firms and that at least 50 percent of the workers at the facility will come from nearby neighborhoods. The University also said that the dining commons will be “available for public use.”

The University had also announced preliminary plans to build a dorm at 61st and Dorchester in July 2017 at a community meeting, according to reporting by the Hyde Park Herald. The site of this proposed dorm is different from that announced in Boyer’s email.

Due to over-enrollment in the past year and a higher-than-average return rate, the University expanded housing options for returning students to include Vue53, and eliminated graduate student housing in International House in August 2016 so that the building became an exclusively undergraduate dorm.

New construction is aligned with Boyer’s vision for College housing, as laid out in a 2008 essay. In the essay, Boyer suggested building two or three additional residence halls to be able to house 70 percent of college students on campus.

According to a university spokesperson, the University had the ability to house 56.23 percent of College students as of last quarter, after the recent addition of Campus North and Vue53 and the closure of several satellite dorms.

This article has been updated to reflect the most recent capacity figure from the Housing & Residence Life Office.