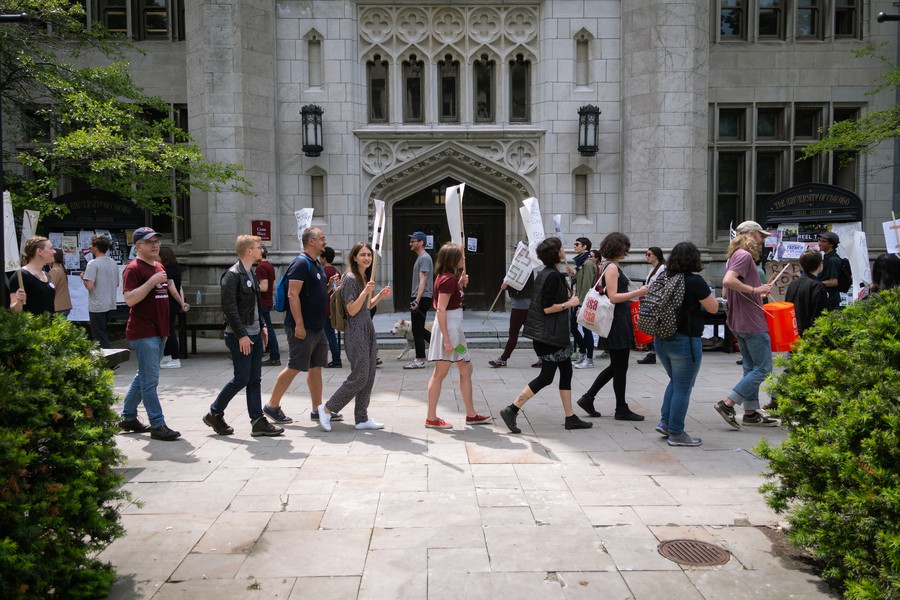 Cobb hall has been a major locus of picketing for the strike so far.

The strike, which began on early Monday morning and lasted through rain and sunshine, drew up to over 400 supporters by Wednesday afternoon.

Read our full coverage of the three-day strike here. 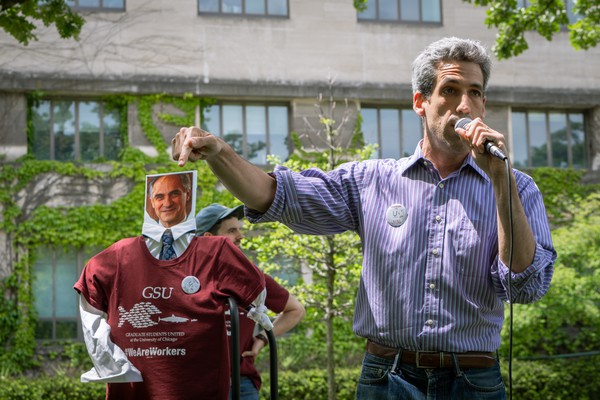 Daniel Biss speaking at a rally on the third day of GSU's industrial action.

The MacArthur Foundation announced a $5 million grant on Monday to create a new branch of the Chicago Public Library (CPL) at the Obama Presidential Center.

More on the Stone family: The Maroon sat down with Mollie Stone, director of UChicago’s University Chorus and Women’s Ensemble and conductor of the Chicago Children’s Chorus.

Former Secretary of State Madeleine Albright and former Secretary of Defense Chuck Hagel stopped by Mandel Hall to discuss tensions with North Korea, the role of social media in global terrorism, and more. The event was organized by the Chicago Project on Security and Threats (CPOST), and the conversation was moderated by the director of CPOST, Professor Robert Pape.

Former Photo editor Zoe Kaiser argues that photojournalism is far from objective, and that portraying it as such is both unproductive and irresponsible.

Fourth-year Qudsiyyah Shariyf reflects on her experience leading Project Reproductive Freedom and argues that UChicago student activism around abortion is disconnected from the realities outside of this campus.

Columnist Lucas Du reflects on the UChicago Secrets Facebook page and argues that it should not be used as a platform for political dialogue.

Davis Larkin writes that arguments claiming graduate students are not oppressed enough to unionize are irrelevant to GSU's fight for recognition.

Former head Viewpoints editor Cole Martin reflects on his time on The Maroon and hopes the section is able to maintain its historic independence.

Grey City spoke to two Ph.D. recipients, Marilyn Webb and Cheryl Dembe, to get the story behind why it took them fifty years to complete their degrees. Both see getting their degrees as an important moment both personally and for correcting problems of sexism in academia.

“What is the role of art in the legal process? Is it irresponsible for someone to consider themselves an activist [if] they’re only making art?”

Winter’s sound is so rich it’s almost unbelievable that the whole album only uses one instrument at a time.

Now known for its creativity, global scale, and extremely competitive audition processes, Cirque stages shows that cannot be missed...and Volta is no exception.

“Smith and Uchis are a natural pairing for a joint tour; their powerful voices combine with their commanding and dynamic stage presence.”

After a historic season that captured an indoors national championship and outdoors Final Four, the men's tennis team has been named the Maroon's Team of the Year.

Becky Benson, our Co-Coach of the Year, led the Maroons divers on an incredible run, culminating in All-American honors for all four female divers.

In the program’s first year, Kate Robinson's strong guidance proved invaluable for the young lacrosse team, resulting in a 15-3 record and the Maroon's Co-Coach of the Year award.

With two top-three finishes at the NCAA National Championships in March, diver Agnes Lo takes home the Maroon's Athlete of the Year award.

That’s a wrap: The Maroon Newsletter is signing off for this academic year. We’ll continue to send out the newsletter during the summer, but on a less frequent schedule—look out for us in your inbox twice a month.